Notes on the third surgery 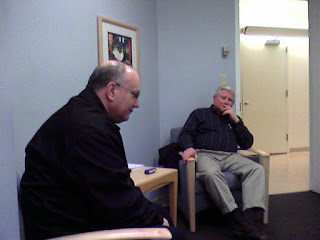 Wednesday morning started a little earlier than we originally thought it would. We were called by Dr. Burgess' office Tuesday evening and informed that the operation was moved forward two hours due to a cancellation. So, we set our alarm for 7:30 AM to assure a 9:30 arrival at Meridian Park Hospital in Tualatin.

When we got to the hospital parking lot we found that the only space that was available was way back at the Tri-Met bus stop. As we walked into the main lobby we found the people responsible for taking the last two good parking spaces: Phil Huffman and our pastor, Gary Gleason were sitting in the lobby waiting for us to arrive.

We were run quickly through check-in (bracelet, ..., sign here) and back to short stay. B222 once again. We knew this place frontwards and backwards by now, with the exception of the new furniture in the lobby and our anesthesiologist, Dr. Kaeder. It wasn't the fact that Dr. Kaeder was odd that made him odd. He's an anesthesiologist and they're all odd. He was just a different different.

His first comment was about Anne-Marie's hat, a black beret. He was very fond of it and told her so. Later, in an overly-excited tone, he told the nurse how much he liked the hat. The reason he was so into the hat was that pulled over the top of his own head, instead of the standard hair net issued at the nurses station, was a puffy chef-style hat that had been given to him as a free promotional item for some unpronounceable prescription drug. The name of the drug started with a Z, so the clever marketing folks had plastered bright green Z's all over the puffy black hat. The nurse informed me that it was just one piece in his treasured collection.

Minutes later, I was looking at the familiar picture of my wife being wheeled into the bleak corridor and out of sight. (It's gotten a little easier.) Mom, Phil, Pastor, and I went straight to the cafeteria. This is becoming somewhat of a tradition.

We all perused the cafeteria looking for something to eat. Today's special? (And I'm not kidding.) Fried catfish. Phil decided to give it a try. I stuck to the second safest choice in America behind a cold-cut sandwich: chicken strips.

We munched for an hour and then made our way back to the second floor. After the second hour Dr. Burgess came in and told us that she was finished and that everything went well. She said that Anne-Marie would be in recovery for the next hour.

During the next hour Pastor and Phil left and an older lady walked into the waiting room. As it ends up her and her husband attend the church that we rented for our wedding. Her name was Beulah Dworschak (DOOR-shock) and after talking a little longer we found out that she also knows our friend Candy Kelly, from (my former employer) Cutsforth Thriftway. Small world; sweet people.

Mom and I ran downstairs to grab an ice cream bar and came back upstairs to catch Anne-Marie as she was being wheeled into the short stay room. She was asleep. "If you wait until she wakes up to go home, you'll be here 'til midnight!" the nurse said. Keeping that in mind, we began to make plans to go home immediately. Anne-Marie was in and out during the next few ours that we spent getting through the check-out process.

We left at 5:15 and hit the afternoon rush. I don't know why it always ends up that way.

Anne-Marie slept on the recliner for the next 24 hours. I spent the night on the couch and used my mp3 player as an alarm clock to help Anne-Marie follow all the doctor's procedural stuff every so many hours during the night. While the idea of leaving the earbuds in my ears while I went to sleep in order to provide an alarm that only I could hear seemed like a good idea, the "random song" alarm feature is obnoxious in the middle of the night.

The follow-up visit at Dr. Burgess' on Thursday morning went well. Anne-Marie ate a donut when we got home and then went back to sleep.