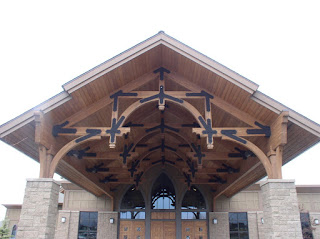 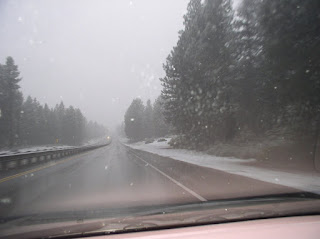 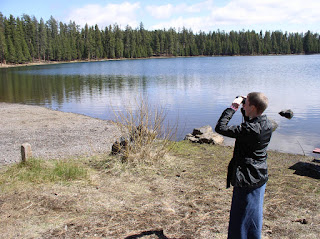 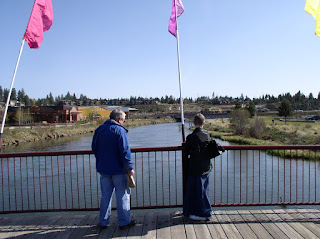 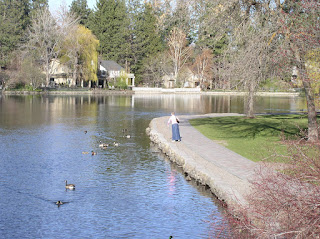 After I finished typing the last post we got a snack at the cafe and packed up the computer and took off. Right now, I'm typing this post on another computer because the connection settings for the one I used at B&N are still messed up.

We went to the store to get peanuts to feed the squirrels, then we headed north 15 miles to Redmond. I wanted to find a project that I had laid out and drawn: St. Thomas Catholic Church. We worked on the project a few years ago but I never saw it in person. After subjecting Anne-Marie and Phil to a half hour of wandering around the residential area of town, we found it. That's one nice-looking church! When we pulled in the parking lot we saw over a hundred others cars. Whoops! We'd arrived in the middle of Mass. I snuck around the entry and took a few pictures of the small entry timber trusses. Then I went into the lobby to see if I could get a look at the big trusses, which were over the sanctuary. When I entered the lobby I heard the Priest wondering aloud where all the people from last week (Easter Sunday) had gone to. I peeked through the door and caught a glimpse of the trusses and the priest in direct line of sight. I jumped back around the corner and ran out the door. Maybe some other time...

The weather wasn't cooperating the rest of the day--in fact, it was snowing at one point during the drive on Higway 97--so we went back to the house and began preparing fajitas.

When we woke up on Sunday, we saw sunny skies and decided to go for a drive. We went to many of the places my dad used to take me when I was a kid. We stopped first at the Twin Lakes, then Wickiup Resevoir, Cultus Lake, and the Deschutes River. We headed north to go around Mt. Bachelor and into Bend when we found out the road was closed for the winter. We went the long way around the other side of the mountain into town, costing us an extra hour.

Once in town, we spent our last evening at Drake Park in downtown Bend. Ducks, geese, and even a single swan swim lazily over the water at this calm stretch of the Deschutes River. Anne-Marie fed the ducks.

We woke up Monday morning with a promise from the rental company that no rush was necessary for checkout. We took our time making breakfast and packing up.

A trip to Sisters to look at the shops is typical for us on our way home. Biggest news from Sisters? New public bathrooms. If you think that's not a big deal, you should have seen the old ones. An hour later, we stopped on the other side of the mountains at Detroit (yes, there is a Detroit, Oregon) to eat at Korner Post. If you ever happen through Detroit by accident, or otherwise, it's not a bad place. We arrived home at 7:30 in the evening. Just enough time for me to get ready for work the next day and for Anne-Marie to be ready for her treatment the next morning.
Posted at 12:04 PM