Here is the first report on what I learned from David McCullough's Truman. Hold on to your hats, everybody.

Harry S. Truman was born on May 8, 1884 to John Anderson Truman and Martha Ellen Young Truman. He was born into a family that had moved to, what was then considered, the "far west." His family was relatively unknown except that his great uncle was Jim Crow Chiles (yes, that Jim Crow). The family did their best to avoid the subject even many years after Jim Crow was killed in a gunfight on the streets of Independence.

Harry grew up in and around the Independence, Missouri area, and was always considered the model child among his friends at school. He began taking piano lessons at a very young age and preferred indoor activities, especially reading, to the rough-and-tumble games of his little brother and the other kids. "To tell the truth," he once said, "I was kind of a sissy." (Yeah...can I be a sissy, too?)

He met Bess (Elizabeth) Wallace when he was six at Sunday School. He claimed to have been in love with her from then on. The feelings were not mutual, mostly due to Bess's higher social standing.

For financial reasons, Harry's family moved all around the western area of Missouri until finally ending up at the family farm. Harry graduated from high school in the meantime and began to pursue Bess, with a little help from Bess's neighbors, Ethel and Nellie Noland, who were Harry's cousins.

Within a few years, Truman got into the banking industry and was doing well. He even worked up the nerve to propose to Bess in a letter in 1911. She waited three weeks to flatly refuse him.

A few years later, however, after Harry had left a very successful career in banking to take charge of the family farm, Bess came around and they began to talk about marriage. In April of 1917, the United States joined World War I, and Harry decided to enlist. Bess demanded that they marry before he was deployed. This time it was Harry's turn to refuse, citing his fear that she would be made into a young widow if they married prior to his departure. 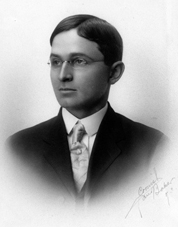 Email ThisBlogThis!Share to TwitterShare to FacebookShare to Pinterest
| More posts about books, Truman