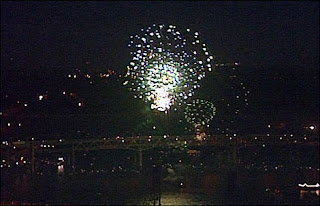 After last year's dinner at the Baldwin's, and the first time in twenty years I didn't attend a public fireworks display, we decided to have a little more activity on the Independence Day.

We put together a barbecue at Phil Huffman's house with all the chronic cuisine. After lunch, we played a game of Scrabble. Then we capped the party off with some peach smoothies and Mike's chocolate peanut butter pie.

As soon as we finished with the dessert, we jumped in the car and headed straight up 99E to downtown Portland to catch the fireworks at the Waterfront Blues Festival. The plan was supposed to go like this: leave Phil's at the last possible minute, drive like crazy to a quiet parking lot on the Eastbank Esplanade (the EE is across the river from the Blues Festival, but just as good a view with less crowds), get out of the car, run to a nice spot on the riverbank, watch fireworks, run back to the car, drive out of town before people are finished cheering.

Here's what actually happened: left five minutes late, drove beyond crazy to our favorite public parking lot only to find that it was closed to the public, drove south, got detoured into the Portland Opera parking lot, got out and waited for the fireworks, found out that the Marquam Bridge was in the way, ran north up the bank to a better vantage point, watched the rest of the fireworks, ran back to the car when people started cheering, got stuck in massive East Waterfront construction, ran over seven or eight cheering pedestrians, eventually joined the mass of cars headed south to the suburbs.

Email ThisBlogThis!Share to TwitterShare to FacebookShare to Pinterest
| More posts about pdx, stories