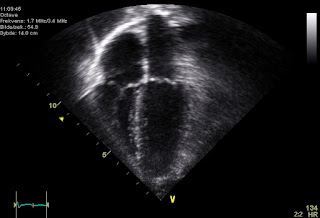 Anne-Marie reached the two-thirds mark for Herceptin treatments Friday before last. Along with that, she had an echocardiogram to check for heart damage from all the various medications and treatments.

As far as we know there was no problem, but of course the technician, technically, was not supposed to tell us anything. However she did, show us the different areas of the heart and what it would look like if it were damaged. (Leading us to believe that since it didn't look as she described that we were just fine.) Unfortunately, the cardiac sonographer--that's what they call an echocardiogram technician--inadvertently found an obstruction in Anne-Marie's gall bladder. We'll probably worry about that one later.
Posted at 11:37 AM

Email ThisBlogThis!Share to TwitterShare to FacebookShare to Pinterest
| More posts about Herceptin, recovery