On the night of our 6th anniversary, Anne-Marie and I went to our Baked Alaska. It's our favorite restaurant in Astoria, and we've made a tradition of going there our last evening in town. We were enjoying Garlic Treats and Campfire Salmon when Terence and Lonnie Shumaker were seated next to us. Terence taught me civil drafting back at CCC. They had just finished up a hike on the Fort to Sea trail which features bridges supplied by the same company that the college sent me to work with six years ago. We had a nice conversation as we watched ships being guided into the sunset by the river pilots.

Another interesting encounter happened as we walked out of Baked Alaska. We were about to take a short walk down the riverfront boardwalk when a voice called out to us from the sidewalk.

"Did you park your car in this parking lot?" the young lady asked.
"Yes, but we just finished dinner in Baked Alaska," I explained
"Oh, I was just wondering where you came from."
"We were planning on a short stroll down the boardwalk."
"We just finished dinner at Baked Alaska. Have you ever eaten there?" Anne-Marie added.
"Yes! I'm actually one of the owners, and I'm just checking to make sure no one takes our parking!" the suddenly embarrassed woman said.
"We'll move our car if you want."
"No, no. It's OK, really. I'm sorry. I was just making sure."
"Wait: are you one of the Holens?" I asked

Come to find out that it was indeed Jennifer Holen. Her and her husband founded Baked Alaska restaurant just a few months before our first anniversary trip to Astoria in a storefront. (They've now expanded to two restaurants that can hardly handle the business.) After introductions and awkward apologies, we stood on the boardwalk and told her of all the wonderful experiences we've had watching sunsets at her and Chris's restaurant. She told us about her love for the city and the newest member of the family, Anna, who gazed up at us from her stroller with inquisitive eyes. We left our unlikely meeting place hoping for another chance to catch up on a future visit.

On Sunday, we drove out to the northwest tip of the coastline near Clatsop Spit. At the end of the road is a viewpoint and the gates of Fort Stevens. We've never been to the old World War II coastal defense bunkers, so we decided to drive inside.

But, right before we went in, we stopped at a convenience store and bought batteries for the camera. When we went through the gate, we saw that a $3.00 parking permit was required for entrance: CASH ONLY. I'd just spent all my cash for batteries to take pictures in the fort! We had forgotten our checkbook, there was no ATM on the grounds, and I could only scrounge for a buck fifty out of the console of the car. As a last resort I drove back out to the convenience store, certain that they would have an ATM. They didn't. We kept driving and left our tour of one of the only World War II historical sites in the Northwest for another day.

Our last stop before heading back home was at the Fort to Sea Trail. We walked to Sunset Beach and considered walking a few miles back inland to see if we could find some of the several bridges that our company supplied for the government project. We decided against it. We did, however, find some of our work between the parking lot and the beach and took the picture you see below while we were there!

We made a lot of memories this year. I hope we will have the privilege of returning next year for anniversary number seven! 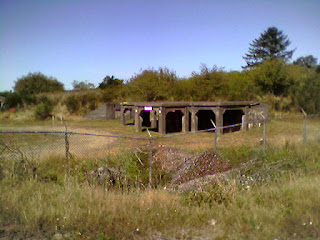