Friday night we celebrated Christmas with my mom at the Oregon Symphony Gospel Christmas at the Arlene Schnitzer Concert Hall. The concert was conducted by Charles Floyd.

Our evening started out with dinner at Mom's house in NoPo. We made our way to the Schnitz around 6:30 for the 7:30 concert. We made our way down to row E, which was the second row for this particular stage setup. The great seats were Mom's Christmas present to us.

The hundred voice choir made up of local talent combined with the Oregon Symphony for two hours of the most complex and amazing take on Christmas music that I've ever heard.

People love this particular series so much, it has become the most popular of the Symphony's entire season. It sells out all three nights.

This year featured songs by Israel Houghton, Donnie McClurkin, Kirk Franklin, and Walter Hawkins. Real good stuff. Even though the crowd was not even half "church folk," people cheered, stood, clapped, and shouted "Hallelujah!" with the singers.

After more than of a dozen songs of praise and worship including new arrangements of traditional carols, the choir and orchestra were finished and we made our way to dessert at 3 Doors Down cafe in the Hawthorne District. Banana Cream Pie is very recommended. 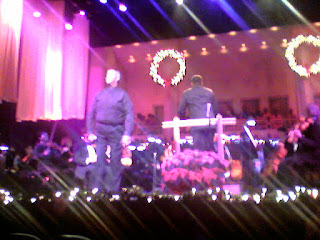 Pics: (sorry for the no flash cameras allowed only phone pics) Soloist Richard Probasco prepares to sing the first song--weird lighting effect; Conductor Charles Floyd, in inimitable, self-effacing style addresses the audience; Floyd throws his back out on the last song and jokingly pleads for pity from Music Director Gary Hemenway 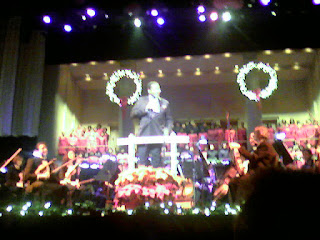 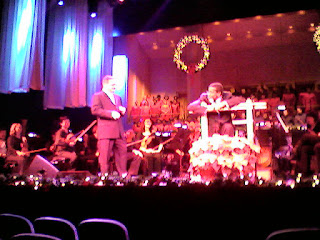 Email ThisBlogThis!Share to TwitterShare to FacebookShare to Pinterest
| More posts about family, holidays