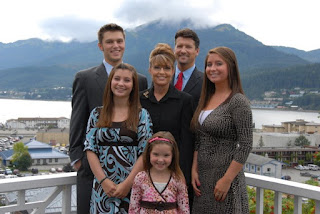 (I know after my post about Joe Biden that this is going to sound partisan or just plain unbelievable.)

Earlier this week when we were looking at the media's short list of vice presidential candidates, I said to Anne-Marie, "What about the Governor of Alaska...what's her name?" I looked it up quickly and said again, "Sarah Palin! Why didn't they put Sarah Palin on the list?"

Not that I had a preference of her over some of the others, but I thought her name would come up. Well, it did...and on top! I think this is a sold choice for McCain--a man who comes across as less than genial sometimes. Governor Palin is hard NOT to like!

Just in case you wonder about my opinion, the Veep picks that wouldn't have worked were Tom Ridge (too liberal for GOP) and Mike Huckabee (too religious for moderates).
Posted at 8:21 AM

Email ThisBlogThis!Share to TwitterShare to FacebookShare to Pinterest
| More posts about in the news, random