Love isn't only when you feel it

One the 2nd weekend of each September, Anne-Marie and I take time to celebrate our anniversary.  This year--to celebrate NINE years--we are headed once again to Astoria to have a romantic weekend together.  We're not even bringing the kids (who of course will be left with armed guards in a secure location).

For the first seven anniversaries we stayed in a bed & breakfast in Astoria.  You remember that last year we had to cancel the eighth-year-anniversary trip because we needed to be in Ethiopia that same week.  We made up for that trip by going to the same B&B in January.

This year, the tradition changed ever so slightly.  We will NOT be going to a bed and breakfast.  Instead, we're going to be staying at the Hotel Elliott in downtown Astoria. 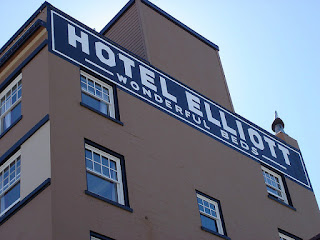 Built in 1924; restored in 2003.  Should be an experience and hopefully a relaxing one.  The fact o' the matter is, Anne-Marie and I have both been very sick this week and really don't feel like putting together a romantic weekend.  I'm so glad that love doesn't have to wait until it feels like it.

Since we are entering our 10th year of marriage, I think maybe I'll post some stuff about love and romance over the next year.  How's that sound?
Posted at 8:11 AM

Email ThisBlogThis!Share to TwitterShare to FacebookShare to Pinterest
| More posts about love, us, vacation