The last two weeks we've spent most of our time searching for a place to live in Pierce County, Washington. We thought we found a place in the Lakewood area, but we were too late for that. Then we thought for sure we had a lock on a house in the Spanaway area, but we were just barely too late for the house there (one guy who must have been very fast with his application and deposits beat us to it).

On Thursday, we came to an agreement on a rental on a house Downtown Puyallup. It's a bit of a unique situation, especially for the Seattle market. The standard deal up in Greater Seattle is to have a potential renter agree to a 12-month lease, that way they don't have to re-paint the place and do all the other turnover maintenance for a new tenant. After you've been there a year, they allow you to do a month-to-month rental until you choose to move out.

This house is only available for month-to-month rental because it's currently on the market. A local military family has been renting it, but--since he is just about to be honorably discharged--they are moving out in November to move back to their home state. The owner wants to keep the house occupied until he's sure it's sold, so he made an agreement with us to rent the place for a decent price and take care of it while it's on the market. Great deal, unless it sells quickly. Then we have 30 days to get out. It's been on the market for two years, so we might have a shot at being there for at least a little bit while we get the other details of our new life in WA worked out.

What will we do until November? We're putting together some "stopgap measures" to get in town sooner. What happens if the house sells? For our landlord's sake, we hope it does. For our sake, we really wish it wouldn't. But either way, we'll get it figured out. God knows where we're at.

Here's a picture of the house: 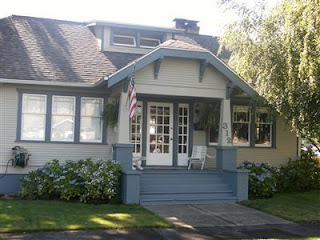 Neat, huh? So glad our lives are never boring.
Posted at 7:51 PM

Email ThisBlogThis!Share to TwitterShare to FacebookShare to Pinterest
| More posts about the move