I know most people dread Mondays.  For me, it used to be Thursdays.

Let me tell you a little story.

In my early 20's I had the worst grass allergies you can imagine.  I would come from work every other day of spring and go straight to bed because I felt so sick. So in 2004, my buddy Ted and I went on a mission.  We were gonna find the best lawnmower (my) money could buy.  We found it at Stark Street Lawn and Garden in southeast Portland. 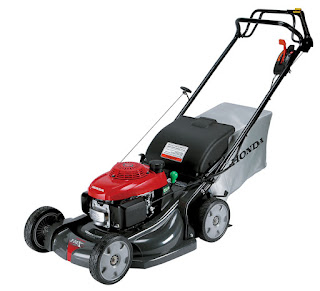 Unlike most decisions made out of desperation, this one was actually a good one.  It served us faithfully for eight years with little to no maintenance.

The morning after the 4th of July (Wednesday), it disappeared.  The Commencement Bay fireworks display is just down the hill from our house, so a lot of people flood into the neighborhood to find a good vantage point for the show.  Someone in the crowd must have looked over the fence into my backyard and saw my mower.

I went to mow the lawn and it wasn't in its usual spot.  I searched all around the house and in the garage and couldn't find it.  I figured it had taken its place on the list among all the other stolen goods from our neighborhood and on that other list of calamities over the past couple months.  And I felt sorry for myself.

Three Thursdays previous my boss got the axe, beginning a period of upheaval in our department that we're just getting figured out now. Two Thursdays before, Anne-Marie twisted her ankle while using (guess what?) the lawnmower. The week before on Thursday, our car of 11 years suddenly blew up and we had to scramble to find a way for me to get to work.  So when I found out that they* stole my mower on that fourth Thursday, I was pretty upset.  And I definitely wasn't looking forward to what was coming on the fifth one.

I chained the BBQ to the porch, put a spotlight in the backyard and started looking for another mower.

Wednesday morning a stay-at-home dad named Kyle called my wife on the phone and told her that he had a mower that he believed belonged to us.  If that sounds strange to you, you gotta know that it certainly sounded strange to me.  I'll attempt to explain in the fewest words possible:


Kyle--who lives about a mile from us--heard something strange at about 6 AM on Thursday morning while he was standing in his backyard.  He looked over the back fence and saw a very large man dressed completely in black rolling a pretty nice Honda lawnmower down the street.  Because Kyle knew it was a nice mower and that this guy probably wasn't doing yard work at 6 AM, he decided to follow him.  Kyle stayed about two blocks behind the man as he pushed it through the neighborhood.  As he was walking he got on his cel phone and called the police.

The police began to move in to the neighborhood while Kyle was guiding them over the phone to the man's exact location.  He then saw, looking down the street from a distance, that the man had left the mower on the sidewalk and was taking a breather on the porch of an apartment complex.  As Kyle directed the police into position, the thief saw him and disappeared into the apartment complex.  When Kyle and the officers met up at the scene, the man couldn't be found, but the Honda was still on the sidewalk.

The Tacoma Police Department doesn't have special trucks or a special storage facility for wayward lawnmowers, so Kyle agreed to keep it for them while they waited for someone to report a stolen mower in the Stadium District.  Kyle asked around the area if anyone knew whose it was with no results and then just let it sit in his garage (next to his not-nearly-as-nice lawnmower).  Discouragement and futility were pretty much the watchwords at our house, so I was putting off reporting the incident to the police.

After a couple of days of waiting on the TPD to call back, Kyle figured he would take matters in his own hands.  He looked at the mower and tried to think of ways he could identify its owner.  Then he saw a dealership sticker on the mower's deck that said Stark Street Lawn and Garden.  He called the number on the sticker, they gave him our phone number, he called it and now our mower is back.

This guy--for no other reason than a sense of morality and decency--saved us from spending hundreds on a new mower.  At the same he restored some of our lost faith in humanity.  Thanks Kyle, you truly are a miracle.

*You know you're really irrationally bitter at life when you start blaming everything that happens to you on the ethereal "them".  As if the whole world is against you.
Posted at 9:47 AM