Where do I begin? (or, how we ended up in the hospital for 5 days)

This week had an ordinary beginning.  We were waiting for a call from University of Washington Medical Center's Scheduling Department that would tell us when Anne-Marie was supposed to go in.  The appointment is important because--as I mentioned before in this post--surgery needed to happen right away.  Along with this, the surgery was difficult to schedule because two different surgeons with two different specialities need to be available to do the work.

We figured the call would come sometime on Monday, or at the latest on Tuesday and from there we could start making plans for the holidays and what's left of 2012.  Preparations were being made for our friends Don and Sarah to come for their annual fall visit along with all those other things we wanted to sneak in before surgery, which we figured would be scheduled for sometime in the middle of November.

Monday came and went without anything significant happening, except that Anne-Marie had a red spot on her chin.  Herceptin has caused the spots plenty of times in the past.  We were upset that we didn't get a call.

Tuesday, Anne-Marie woke up and the spot was much worse.  Her face had begun to swell up.  She was in a lot of pain and was having trouble talking.  I stayed home from work while Anne-Marie contacted her oncologist to find a solution.  The kids had a doctor's appointment, which I took the kids to.

In the middle of all my running around, the scheduling department called to schedule Anne-Marie's surgery.  October 31st.  Apparently, the superstitious people of Seattle have all kinds of things they'd rather do than be cut open on Halloween.  This cleared the path for us.  We only had eight days to prepare, but because of the aforementioned reasons, we felt we should go ahead with it.

In order for the doctors to clear up what apparently was an infection on Anne-Mare's face, they prescribed antibiotics.  I ran to the pharmacy to pick them up, then I went to work to do a swing shift and Anne-Marie fought through the pain to keep things going at home.

Early Wednesday morning, Anne-Marie was worse.  Why weren't the antibiotics working?  We decided to allow the medication a little more time.  I went to work (After all, I couldn't spend ALL my time at home.  I needed to save my vacation time for surgery next week.)

At 1:30 in the afternoon, the oncologist told Anne-Marie that if she wasn't improving she needed to go to the local ER (Tacoma General Hospital) immediately.  I came home from work to watch the kids.

As our friends Nick and Kaylee came to pick up the kids, I couldn't help but remember September of 2006.  That trip to the ER started on Monday and didn't end until Friday.  Maybe they would only keep her for a couple of hours.

Before I could get there and by the time Anne-Marie was brought into short stay, she was running a fever.  The ER doctor told us they needed to put her on IV antibiotics for a "couple of days".  The swelling didn't improve, in fact it got worse over the next 24 hours.  The infectious disease specialist was brought into the mix.  He prescribed specialized antibiotics that by Friday morning started to help just a little bit. 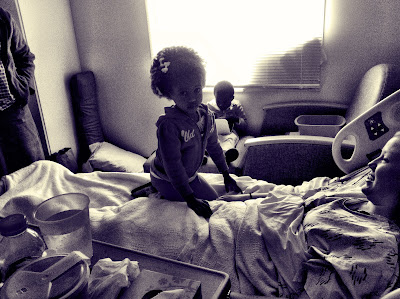 The doctors then gave us the good news that due to the success of the new treatment, Anne-Marie would only need to stay "a couple more days".  That was Friday.  Today is Sunday.  And even though she's doing a lot better, they won't give us any specific timeline.

(Of course, we postponed the surgery.  The folks at University of Washington don't want to have anything to do with someone with infection problems.)

Now we're stuck here with a diagnosis of cellulitis and hope that we may go home today.  There's nothing we can do about it, so we'll just sit tight and pray for grace and mercy.