Notes on the 6th surgery, Part One

First off, let me start by saying that I think this is the 6th surgery.  That is, if you include the one "covert operation" that wasn't mentioned on this blog.  For us, it counts as surgery if you go to the OR.  Clinic stuff doesn't count (or Anne-Marie would be well into double digits).  This also means that I have never had surgery.  Keeping that in mind, let me tell you how it all went last Monday.

We crept around the house in a quick scurry.  The kids needed their sleep and it wouldn't hurt them to show up at the hospital (with the grandparents) a little bit later.

We scamper out the door and through a huge storm system to the safety of Interstate 5.  34 miles from Tacoma to University of Washington Medical Center.

I-5 during a storm is like speeding through the world's longest driver-thru car wash, so we were barely on time.  We got a parking spot right up front and didn't have to pay because even parking attendants don't get up that early.  However all the other first-wave surgery patients beat us to the check-in line.  While we were waiting we saw the family: Mike, Brian and Kara waiting for us.

Arm bracelet, stickers, "what's your date of birth?"  Any of you ever been to surgery before?  Because those are the three essentials to any surgery.

Anne-Marie is called back to the staging room.  This is when I realized that UWMC is huge.  When I went back there, I saw an army of people in blue scrubs.  They were preparing maybe 100 people for surgery.  It was an amazing spectacle.  We've been to almost every hospital in Portland (and recently to the rather sizable Tacoma General), but this was at least twice as big as anything I've ever seen.

Mike, Brian and I took turns sitting with Anne-Marie.

Phil, Ramona, Mom and the kids left an hour after us, but got stuck in the traffic caused by the storm.  They wouldn't make it in time to see Anne-Marie before surgery.

The nurse informed me that it was time.  Because this is the sixth surgery and 8th hospitalization, I'm a little better at holding in my emotion.  A little.

The grandparents had finally arrived and--since I'd been up for over four hours--it was time for breakfast.

One thing I learned pretty fast: the cafeteria at University of Washington Medical Center is not good as the one at Tacoma General.  There are lots of great places to eat in the University District.  "Plaza Cafe" is not necessarily one of them.  They get penalized on price alone.

If St. Vincent could increase their strength of schedule next season, it wouldhelp them out with the computer rankings and possibly push them to #1.)

We ordered a ton of food and wasted as much time as we could in the dining room.  I always like doing this during surgery because it takes my mind off what's happening upstairs.

We made it back to the surgery waiting room and almost immediately I got a call from one of the surgical team members.  I picked up the phone and he was just calling to tell me everything was going great.  I hate that.  "Dr. Cahoun is just about finished and Dr. Mathes will be coming in to do his part in a few minutes."

That set me on edge for the next two hours.

After two hours at the hospital, my two sleep-deprived children were freaking out.  They wanted to run around the waiting room and jump on the couches.  I figured this would be pretty annoying to the few dozen stressed, sad and sleeping people sharing the space, so I took a self-guided tour of the entire facility in search of a more kid-friendly frontier.  Where else could they go?

It took me a while, but I finally found it: The Labor & Delivery waiting room.

It was small and quiet and had a fish tank.  The walls were painted in soft earth tones and the furniture was bullet proof.  And it was empty.

I walked the mile back to surgery and had the grandparents bring the kids to their newfound paradise.

The cousins all arrived a few minutes later.

Dr. Cahoun, the surgical oncologist, called my cel phone and said they "removed the mass" and everything went well.  The cosmetic surgeon was preparing to take over in the OR.  No pathology or lab tests were done on the mass, so we didn't (and still today do not) have proof of what it is.  The biopsy six months ago said it was an invasive malignant tumor.  We'll get more detailed lab results on exactly what it was soon.

Dr. Mathes, the cosmetic surgeon, came to the waiting room and let me know that the first phase of reconstruction was complete and that everything was done by the book.  He informed me that the process would from this point be turned over to Dr. Colohan, the surgeon we intended to use originally before the cancellation three weeks prior.  Anne-Marie would be moved to recovery in a few minutes.

The receptionist called me over to the waiting room desk and told me Anne-Marie was ready to move to a room and that they'd be wheeling her down the hall soon.  All right!  10 hours awake and I can finally relax!  I looked up and this is what I saw: 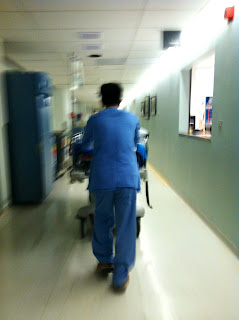 So I left my coat, my wallet and the family behind in the waiting room as I ran to catch her.

(This will be continued when I get around to writing the second part.)
Posted at 7:53 PM