I don't get through a lot of books these days.  Back in 2005, I hit my peak with 23 books in a calendar year, which is an enormous number for me.

The last couple of years my books-per-year numbers were more like 3 or 4.  It's hard to read in a house that has no quiet time or alone time.  The only time I'm ever alone is on my commute or lunch break (which gives me the opportunity to get through some audio books).  The only time it's ever quiet at my house is after the kids go to bed, which usually gives me rare one-on-one time with Anne-Marie or doing things around the house that I have to do.

Aaaannyywayyyzuh...that's the long explanation of why the books have been on the shelf for the last few years.

In 2013, I did manage to get a few books in.  One of my favorites was Willie Mays: The Life, The Legend by James S. Hirsch. 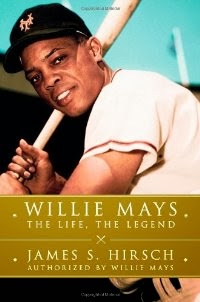 After huge hype going into last year about Brooklyn Dodgers legend and civil rights hero Jackie Robinson, it was nice to find balance in a simple, shy man whose life was filled with difficulty.  Willie Mays was raised with a broken and rather confusing home life but found his place in athletics.

Hirsch describes in depth Mays' relationships with his awkwardly-unwed parents and his aunts (who did much of the child raising in the Mays house), along with stories of Mays' athletic exploits as a young man in baseball, football and basketball.

Tales of the Negro Leagues, All-Star Games, The World Series and "The Catch" are all in there, but to me--the guy that doesn't really like sports books--the most interesting parts of the book were about the seemingly-random things that make Mays, Mays.

It's the stickball games in the back alleys of Harlem.  The relationships with management.  The mid-career Korean War service.  The transition from being a New York Giant to being a San Francisco Giant (and the awfulness of playing baseball in Candlestick Park).  The fact that he wasn't Jackie Robinson.  At all.

Hirsch sold me on what I should've already known: Willie Mays was a 5-tool baseball phenomenon that should be among the top three players of all time on any list worthy of respect.  Yet behind all the legend there is a life that's even more compelling.  I think that's what makes great men great.

Email ThisBlogThis!Share to TwitterShare to FacebookShare to Pinterest
| More posts about books, sports