October is National Breast Cancer Awareness Month.  I usually try to post at least once about the topic during this time and usually I write something inspirational and determined.  Not this year.

This year I want to talk about pink ribbons.  Many things have been said about the pink ribbon over the past five years.  People love it; people hate it.  The shift in public reception from when Anne-Marie was first diagnosed with BC in 2006 to now has been huge.

In 2006, we had friends openly support us by displaying pink ribbons.  They were making the declaration that they were with us in our struggle.  Today, I have friends who tell me how stupid and annoying they think the pink ribbon campaign is.  People's criticism of the pink campaign usually has one primary target: Susan G. Komen.

For those who don't know, Susan G. Komen is a charitable organization named after Susan Goodman Komen.  Komen was dying of BC and her sister promised her she would do everything she could to help other people with the disease. 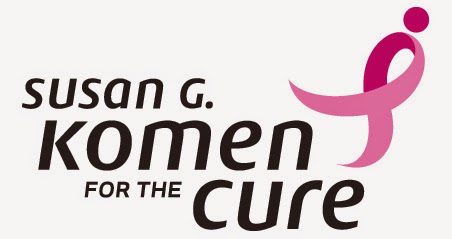 The controversy with PP happened in January of 2012 and has dogged Komen ever since.  Perhaps politically motivated, the more conservative Komen ended funding for screening with PP, who is the largest abortion provider in the US.  Liberals freaked out, Komen changed course, conservatives freaked out, everyone was angry and donations dropped by over 20 percent.

There have definitely been some fair criticisms of Komen and "pink-ribbon causes" over the years.  Tons of pink stuff everywhere in the fall.  The use distribution of funds.  The CEO's salary.  I hear you on all that because I--just like you--want my dollars to go as far as they can to the most worthy cause that they can.

But before you turn your back on the whole thing, please hear me out on just these few points:

1.  There are plenty of other "pink ribbon" organizations beside Susan G. Komen

The so-called pinkwashing that you see around America is hardly the result of one organization.  The NFL isn't partnering with Komen (or the Oregon Ducks).  Those pink uniforms are helping another non-profit.  The annual push by Estee Lauder--who invented the pink ribbon--goes to support the Breast Cancer Research Foundation.

The numerous non-profits that support breast cancer related treatment is actually an advantage for those who are truly concerned about the cause.  Do you hate Komen?  Awesome!  Consider Dana-Farber, LBBC, The American Cancer Society.  The options that we're given to find a charity that matches our values gives us no excuse.  And because of that...

2.  You are free to donate your money elsewhere...

But answer this honestly: Do you?  For many people that pink can of Campbell's Soup is the whole of the donation that they will give.  These type of things make up a large part of the hundreds of millions of dollars that are donated annually to deal with breast cancer related issues.

So you can say it's all too cute, that it's cause marketing and that it doesn't actually impact real people.  You might be right on the first two, but you're wrong on the last one.  Very wrong.

In May of 2012, when Anne-Marie was diagnosed with a recurrence of breast cancer, I was a self-employed freelance drafter that had no health insurance.  Since then, Anne-Marie has received two and a half years worth of treatment at the finest cancer hospital in the Western United States.

Who stepped forward to help us out?  The Susan G. Komen Foundation.

A grant from Komen provided us with coverage for our medical bills.  After I received my current job and I (unfortunately) found out that the premium and out-of-pocket costs for my wife would still send us to financial ruin, Komen's grant still held.

Obamacare tried to take the coverage away (twice!) and failed.  It's a good thing because the Affordable Care Act isn't really that affordable.  Not when you have a serious medical condition, anyhow.  Trust me: I've run the numbers many, many times.

Donations given to Komen have helped a very overwhelmed family who had so many other things to worry about, worry about things a little less.

So you can go ahead and hate and bash.  I know people think they have their reasons.  But you're not going to hear that kind of talk around here.  Everyone has their opinions, but we've lived it.

It's an opinion that I think is worth sharing.
Posted at 9:18 PM