After making a half dozen really hard phone calls, we left the hospital, picked up the kids and made our way home.  Pastor H. and his wife came in right behind us along with our friends, Brandon and Kara.  They brought us dinner even though it was 9:30 at night.

Yvonne H. just sat and cried with Anne-Marie.  B & K encouraged us to eat the food they brought.  It was true, we hadn't eaten anything since noon.  I had no appetite at all till I started eating.  That helped.

When Pastor H. said we were going to pray, he really meant it.  It wasn't a recitation or ritual.  He didn't care where or when, but prayed with passion and urgency.  Tears flowed and it was a very beautiful thing.  God gave us peace and a few hours later we were able to find some sleep.

The next day I stayed home to be and emotional support to my wife--and because I was a wreck.  There was one more reason: I needed to secure the first available appointment with Anne-Marie's oncologist in Seattle.

Anne-Marie tried making the call first.  Seattle Cancer Care could see her in about 2 1/2 weeks.  (I don't think so.)  I got on the phone where I was told that the ER doctor may have been too hasty with his assessment of my wife's condition. I talked until I convinced them it was an emergency and then told them how it was gonna be.  A few minutes later they called us back and asked if the day after tomorrow would work.

After returning to work for two really distracted days, I had the day off on a Friday to take Anne-Marie to her appointment with the oncologist.  I knew they must've made us a priority, because Dr. Korde doesn't do consults on Fridays.

The Seattle Cancer Care Alliance clinic is beautiful and modern and just off the shore of Lake Union. We sat overlooking the water while wondering what the oncologist would say about this one Vancouver-area ER doctor's diagnosis.

(Below may be more extreme than you wish to know or read. I am telling you the story of how it really happened. Proceed advisedly.)

They called us back for the consult. We were hoping the Dr. Korde would set the record straight on this.

Dr. Korde told us that she believed the ER doctor was correct in his assessment. Anne-Marie's cancer had returned. This time the cancer had metastasized through the lymph nodes into the lungs. It was inoperable and incurable. And, while treatable with chemotherapy, it would eventually take Anne-Marie's life.

Silence. I was the first to break it with some needless explanation about how unexpected it was and the ER and pneumonia and whatever. Dr. Korde felt terrible and awkward about it all and told us that with the newest treatments we could gain "years" or even "decades".

She hugged Anne-Marie and told her she was 90% sure of the diagnosis and that she would schedule us for a bone scan, additional CT scans and a biopsy within days. Then she walked out.

I guess we've faced worse than 10% odds before.

Dr. Korde's scheduler got us a bunch of quick appointments while we were getting ready to leave. They started early on the next Tuesday, April 25th. We stayed overnight on Monday to be ready to go first thing in the morning. We tried to enjoy our time in Seattle (at least a little). 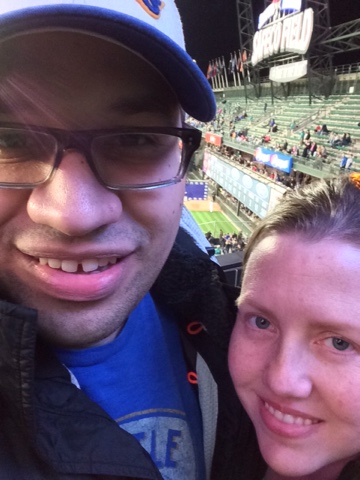 First on the schedule was prep work and consult for CT scan. Pretty boring stuff. Then the scans started. They let me go as far as the door to the CT room. Everything went fine and we were sent almost immediately to bone scan. I was surprised to find out that I was welcome in the room for that.

I watched them go through the entire scan. It took 20 minutes to scan Anne-Marie's entire skeleton like a paper in a fax machine. But the radiologist doing the preliminary review wasn't satisfied with the basic scan. He ordered a more detailed look at Anne-Marie's legs. Her knees really. 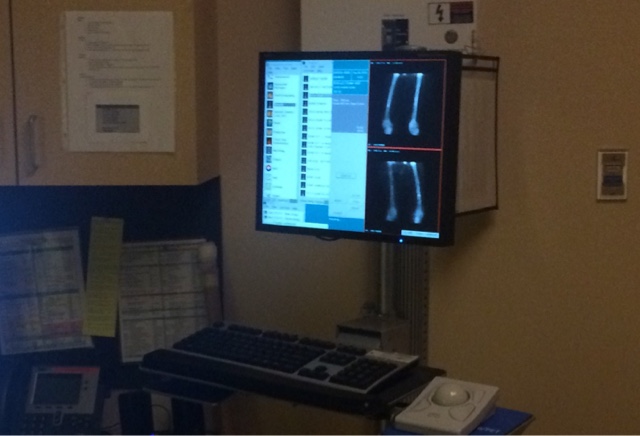 I put it out of my mind. Whatever. Standard precautions. They did a few more targeted shots and cut us loose, but they didn't really. Back at the hotel two hours later they told us they scheduled the 3rd phase of testing for us: a lung biopsy. Could we come in tomorrow?

Sure, that meant securing a babysitter and a room for another night, but better than coming back to Seattle the next week, too. We got the details worked out and accepted the appointment (thanks, Erica).

They wanted us there really early for the lung biopsy. Most of University of Washington Medical Center was still closed down when we got there. They treated the whole thing like a surgery with the exception of using general anaesthetic. They neede her awake to breath on command.

The doctor (his name escapes me, but he looked like Harry Connick) assured me of the safety of the procedure and how she was gonna do just fine. Of course I knew the truth. They don't call it a "long-needle biopsy" for nothing.

It wasn't long before the procedure was finished and Anne-Marie was brought back to recovery in a lot of pain. The pain remained on the drive to the hotel, through the evening and into the night.

When Anne-Marie woke up in the morning she felt fine. That allowed us to make a few quick stops in our beloved Tacoma before we drove finally home.

Now it was time to wait.

The waiting wasn't without complication. The next Sunday night, Anne-Marie began to come down with the flu. Too much time hanging around hospitals and being physically drained.  She was so sick she could barely function. By Monday afternoon, Elisha had it. By Tuesday, I had it. Then the phone rang.

It was some person from the "lung health department" at Seattle Cancer Care looking to set up an appointment. I asked them the reason and they were dumbstruck. We didn't know yet? We needed another biopsy.  Confused, I set up the appointment anyhow.

The afternoon passed into early evening and I was beginning to feel much worse when the phone rang again.  It was Anne-Marie's oncologist, Dr. Korde.

She apologized for the delay and the confusion a few hours earlier. "The reason lung health called you is because the biopsy from last week came back clear." My excitement rose. What did that mean?

Dr. Korde continued by saying, "The test was clear because we failed to retrieve a good tissue sample. In short: we missed. We will need to try again next week."

"However, I want you to understand the situation and the reason for the delay in getting back to you. I wanted to have all the information I could gather from last week's testing and I need to be frank with you that I'm 99.9% sure of these results."

"The scans show that Anne-Marie has cancer that has spread through her lymph nodes into her left lung and onto the surface of her right lung. The bone scan shows cancer in her back and near her right knee (visible in photo above). We will need to start treatment right away..."

She then started explaining how we could do chemo before we even got the 2nd biopsy results back. I decided to call time out on all of this (in other words, I blew her off) for a few reasons:
1. We wanted a sure result, even if we had a 1 in 1000 chance of it not being cancer.
2. We wanted to transfer future treatment from Seattle to Portland.
3. We were all horribly sick with the flu.

So I put everyone off, went downstairs, told my wife the news. We held each other and cried.

Then I went to bed for the next five days.
Posted at 7:22 AM