Anne-Marie's first chemotherapy session was on Thursday, May 26, 2016.

The chemo this time is Taxotere (also known as Docetaxel or the evil twin of Taxol, Anne-Marie's chemo from 2006). The chemo is assisted by Herceptin and Progeta, which are hormonal therapies. Taxotere will do the work of poisoning the cancer to death while the other two do their best to starve it.

After this four-hour process, Anne-Marie is fitted with a timed-release of Neulasta. This white blood cell booster is placed in a special electronic box and will inject the booster into her bloodstream exactly 24 hours after she finishes the chemo treatment. This counters the chemo's tendency to mess up blood count and potentially cause a blood infection or sepsis. (Anne-Marie had this very thing happen in September 2006 before they freely prescribed Neulasta injections.)

Now that Anne-Marie is in her second chemo cycle--the second was Friday, June 17--we're beginning to see a pattern in the side effects.

The first two days of the cycle come with moderate fatigue. Days three through five have extreme body aches, mouth pain and nearly disabling fatigue. Six through thirteen give you stomach discomfort and bizarre appetite swings. Fourteen through seventeen the poison sets in and you lose your hair. The eighteenth through the twenty-first day the symptoms taper off and normality comes within reach. Then you start over.

I am not a doctor, chemist or scientist of any kind, but from our personal observation it seems like that stretch between days 14 and 17 is key. The way it's been explained to me is that chemotherapy targets and kills the cells in your body that are dividing (aka growing) the fastest. So once the chemo kicks into gear it works to kill invasive cancer cells, fingernail cells, hair cells and white blood cells: stuff that your body cranks out really quick.

After having a heavy cough for more than two months, (we believe) the cancer cells were killed off enough during the third week after chemo to make it mostly go away. Of course this means that Anne-Marie has lost almost all of her hair.

As I said earlier, we are well into the second 21-day cycle and we're starting to learn the ropes again. Because, God knows, this isn't our first voyage. We will cherish every day we have, but our eyes are on late-September when the last of the poison is absorbed into Anne-Marie's cells and we will have a chance to enjoy the beginning of fall. 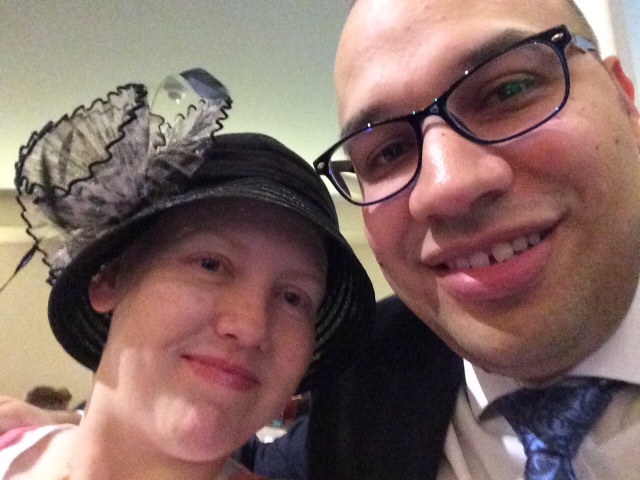 Email ThisBlogThis!Share to TwitterShare to FacebookShare to Pinterest
| More posts about chemo