Coming off the underwhelming news of August's test results, we headed directly into chemo 5. This time wasn't as intimidating since Anne-Marie was feeling about as strong as she had in three months. The extra week given for testing had really boosted her strength which made us even more eager for the treatments to be over (because if she did so well with 4 weeks off, think of what a few months would do).

I needed to get back to work after hearing the test results, so Yvonne H. took care of getting Anne-Marie back home. (As was also the case with chemo 6. Who knew my job would want me to show up sometimes?)

As the weeks followed chemo 5, we noticed that they lingered more and more. Extreme fatigue, massive pain, crazy appetite swings. Things really didn't improve to a comfortable level until two days before chemo 6 (the last). It was the hardest stretch between treatments we've ever had.

Which, of course, means that going into the final chemo session was far more intimidating then going into chemo 5. Pain in Anne-Marie's fingers, toes and feet started to become restrictive as the appointment approached (in mid-September) and the thought of adding to that seemed like too much.

We purposely postponed the trip to Astoria celebrating our 15th anniversary until four weeks after the last treatment to allow Anne-Marie to recover. We needed all of that and more.

We took the trip--which really deserves its own separate post--in stride and enjoyed our time as much as we could, whether it was spent downtown shopping for the kids or resting back at the room.

And that's pretty much how we've handled all of life in the last few weeks.

By now, Anne-Marie has gone by herself to two more Herceptin/Progeta  only infusion sessions. The treatments have been less draining than the last version but more so than we originally hoped.

In 2013, Anne-Marie received nearly identical treatment without as much fatigue and pain. What's unusual this time is that the mandatory heart scan came back completely clear, unlike in 2013 (when they made her stop treatment due to heart congestion). So bad side effects result in a clear scan and no side effects result in emergency cessation of treatment. Welcome to the upside-down world of cancer. We are grateful that treatments get to continue fighting the cancer and look for good results on the scans in four weeks.

(Three weeks to write a single post! I will try to update more often.) 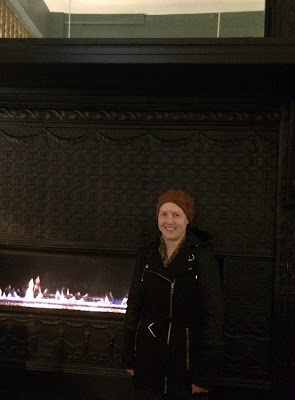