You know the rule. Never post angry. Don't put anything online until you've cooled off and thought it over.

Eleven years I ago I began a youth mentoring ministry in Northeast Portland in partnership with the local housing authority.  In 2008, I spent 90 minutes every Wednesday evening connecting, playing games and teaching lessons about things like honesty, perseverance, forgiveness and being forgiven to local children and teenagers.

It didn't last much longer than 2008 (not by my own choice), but I know the time I spent there impacted my life in ways that still affect me today and I guess I would hope that it impacted the lives of those 30+ students that participated.

I think we all hope that we find something where we can say our time was invested rather than just spent. And I've been blessed to go on from 2008 to be involved in other ministries and efforts, some of them more rewarding than others.

Last Sunday, July 28, 2019, Tylone Tolliver was shot and killed on the corner of Rodney and Russell in Northeast Portland, just blocks away from where my Wednesday night mentoring class was held eleven summers ago. The class where we talked about how it was gonna be different. How it didn't matter where you came from or who your parents were. That no matter what you'd done wrong in your life, the grace of God could offer forgiveness. 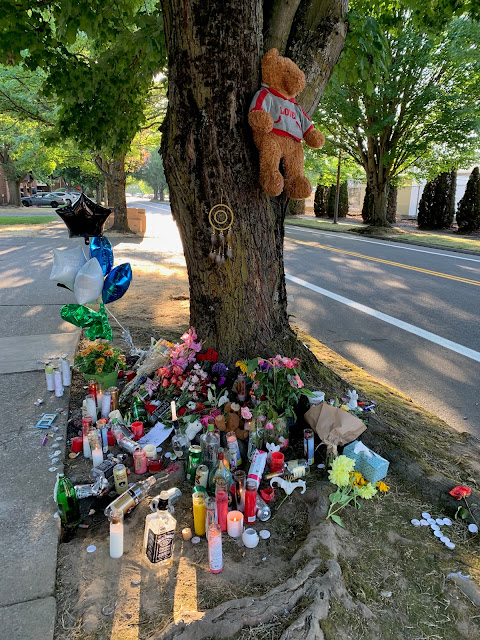 Ty was there. He heard all of it if he was listening. And I'm not sure he was because we fought and argued more than most teachers do with their students. I was OK with it because I knew Ty's life wasn't easy. And he was 14 and maybe just there for the snacks.

When a young man is dead at 25 due to another senseless act of gun violence, it seems somehow selfish, but I've been asking myself since I heard the news, "What was it all for?" Life didn't end up different for Ty. And it did matter who his parents were and where he was from. Since we weren't in touch, I don't actually really know how those adult years ended up for Ty but I'm sure he and his family didn't want it to end like this. It's unfair and it's unfinished and it makes me angry and sad.

Was my time invested in Ty? Or just spent? I've been trying to figure out the answer all week. Either way, all things given away are better than things hidden away.