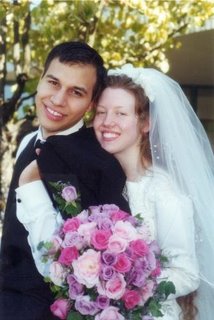 As I lay here, I'm pondering many things.

One is of that special day five years ago: September 8, 2001. Anne-Marie and I were married with no idea of what was to come. No guarantees.

"You'll won't know what it's like 'til you're married yourself," they said. They were right.

We left the next day for Baja California, Mexico. We woke up two days later and found out that our lives had changed forever for the second time in three days.

Another thing that floods my mind this early morning is the thought that, five years later, September 8, 2006, I'm writing this from my wife's hospital room. We're fighting to keep her alive. This isn't how we'd planned it.

No idea what is to come. No guarantees.

You won't know 'til you get there.

Email ThisBlogThis!Share to TwitterShare to FacebookShare to Pinterest
| More posts about hospital, random, stories, us