Thanksgiving was at our house this year.

My father-in-law, Phil Huffman, my mom, Margaret Garcia, Mike and Kara Huffman, and their two daughters Anne and Amy joined Anne-Marie and I for a one o'clock turkey dinner.

Mike and Kara were thrown into a difficult circumstance when their youngest daughter, Alyssa, became seriously ill early in the morning. The solution was for Kara to bring the other two girls for dinner and Mike to bring them back later in the day for dessert. (Don't worry: Alyssa's OK.)

We, for the most part, went traditional with the meal: turkey, ham, stuffing, mashed potatoes, cranberries, Martinelli's. The big twist on the menu was the substitute of the obligatory pumpkin pie with pumpkin cheesecake from The Cheescake Factory, courtesy of my mom. Nothin' like livin' on the edge.

(We also gave the whack to the green bean crunchy onion mess in favor of fresh veggies.)

Thanks to Dad for cooking and carving the big bird (see picture). 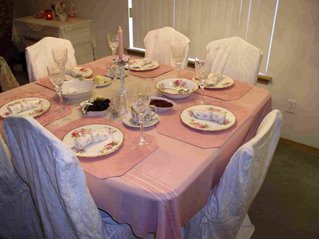 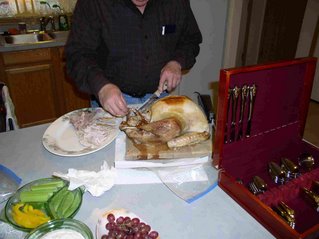 Email ThisBlogThis!Share to TwitterShare to FacebookShare to Pinterest
| More posts about family