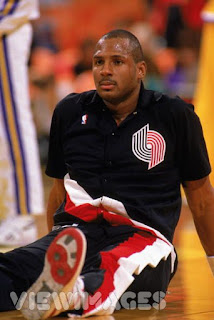 Duckworth was known for seven years as the sensitive big guy in the middle of the Blazers squad that included Clyde Drexler, Terry Porter, Jerome Kersey and Buck Williams. He lived a few miles away from me in Carus, and occasionally I saw him at Haggen buying groceries.

Seeing him always brought back memories of being a kid and rooting for Kevin against Bill Laimbeer, Vlade Divac and Bill Cartwright (centers for the Pistons, Lakers and Bulls, respectively). Him and Clyde were my favorites--no matter what all those Cliff Robinson devotees said.

All of you who don't know what I'm talking about: you just had to live in Oregon in the early 90's.
Posted at 9:28 AM

Email ThisBlogThis!Share to TwitterShare to FacebookShare to Pinterest
| More posts about in the news, pdx