Here's the first post of a series I may or may not continue! 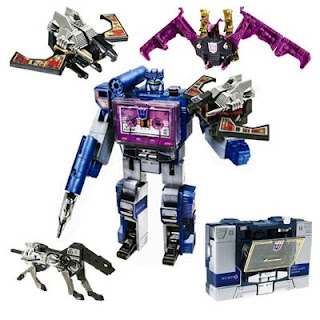 I ran across this on the web today. It's the 25th anniversary edition of a toy that I thought was totally cool when I was about six. It's Soundwave the Transformer. This robot/microcassette recorder was a part of the (very, very evill) Decepticon force. He comes with his subservient microcassette robots Ratbat, Buzzsaw, Ravage. And, yes, he also comes with Laserbeak, who we all know is one of the most pivotal characters in the Decepticons ongoing war with the Autobots.

It's funny that by the time my kids know what's going on, I'm sure they'll have no idea what a microcassette recorder is. And they might ask why, 25 years after they were cutting edge, you would want a fake one for 50 dollars.

Email ThisBlogThis!Share to TwitterShare to FacebookShare to Pinterest
| More posts about '80s, random