Today, February 6, 2011, marks 100 years since Ronald Reagan was born. Ronald Reagan was President of the United States of America from 1981 to 1989, which was when I was a kid. Former president Reagan died seven years ago in 2004 after a decade-long struggle with Alzheimer's disease. 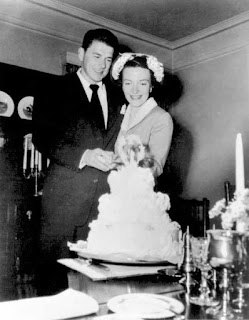 Dear Mrs. Reagan,
And you are Mrs. Reagan because Mr. Reagan loves you with all his heart. Every time Mr. Reagan sees the evening star or blows out the birthday candles or gets the big end of the wishbone he thinks the same wish—a prayer really—that so much happiness will go on and somehow be deserved by him.
It is true sometimes that Mr. Reagan loses his temper and slams a door but that’s because he can’t cry or stamp his foot—(he isn’t really the type.) But mad or glad Mr. Reagan is head over heels in love with Mrs. Reagan and can’t even imagine a world without her—
He loves her
Mr. Reagan
- Ronald Reagan in an undated love letter to Nancy from the 1960's

So many times the negatives of celebrities and politicians personal lives are criticized, while the positives are disregarded as a facade. But now that this is history (albeit recent history), many people have opened up about the close relationship this couple shared. You can call it sentimental or sappy or mis-matched or whatever, but you can't call it fake.

The genuine emotion Nancy Reagan showed after the loss of her husband reminded me that all the things I accomplish in this life are not nearly as important as the love I leave behind with those closest to me. And the warm affection of one woman after I'm gone will mean more than thousands at a state funeral.
Posted at 11:28 AM

Email ThisBlogThis!Share to TwitterShare to FacebookShare to Pinterest
| More posts about in the news, love, us