A tribute to Grandma Nina

Nina was always one for a complete, well-rounded meal, especially breakfast.  She always talked about "a decent breakfast" and "something to stick to your ribs".

It was a Huffman family vacation trip with Gene & Nina and their three kids: Phil, Elaine and Edie.  They were taking a walking tour underground in a deep cavern in the Southwest.

About 45 minutes into the tour, while deep inside of the cavern, all the electric lights went out and the family and everyone else on the tour was in complete darkness.  Couldn't see your hand in front of your face.

The tour guide asked us to remain calm and not move around to avoid falling, or getting lost or injured.

The guide estimated that in approximately an hour--when the group didn't return to the station above--a search party would be organized and come down with lanterns and flashlights to rescue them.  The tour guide assured them that in no more than three hours they would be back above ground.

While absorbing the thought of being stuck in a cave--and not realizing that the tour guide was just having his fun with another group of unsuspecting tourists--Nina announced to no one in particular: "I'm glad I had an egg for breakfast!"

You see, it was important for Nina to keep that strength up, because if there's anything I learned from my years of getting to know Grandma Nina, it was that she didn't have a lot but she had two hands.  And she was going to make use of what she had.

That's how Nina was so generous.  She was always making things for people. It reminds me of the New Testament story of Dorcas.  The Bible says Dorcas was "full of good works and acts of charity" and that when she died they stood "weeping and showing tunics and other garments that Dorcas made while she was with them".  Nina touched a lot of people through her generosity.

And at Christmas, Grandma Nina would give everyone a gift. She didn't have hardly any money, so she would give you something that she got at a thrift store or something she made herself. A favorite of a lot of people were her hand-knit ponchos. She made them custom so they fit perfectly. On a bottle of Tabasco sauce.

All the guys knew what they would get: a calendar from the dollar store. She always came to Christmas Day with a Dollar Tree bag full of calendars for the next year. First-come, first-served.

That meant sometimes you got a good one and sometimes you didn't. It was a great year when I brought my Hot European Sports Cars calendar to work. All the guys in the office would check out the new picture each month as I flipped it to a shiny Lotus or Lamborghini. The next year I got flowers. The guys didn't walk over to my desk to check out the peonies, but I still brought it to work.

I remember walking right by my "horses" calendar as I answered the phone call from my father-in-law telling my Grandma Nina was very, very sick. It's right by the kids' toybox. They love it and always want me to show them the pictures. It was May 20 and things didn't look good.

Nina left us the next day at three in the afternoon on Saturday, May 21, 2011 on the calendar. That day, some people told us God was coming. Of course most didn't believe them and laughed at the prediction. But they were actually correct: God did come. But only for Nina.

As He will for all of us one day.  And when He comes for me, I want them to say I had that same strength, generosity and humor that Nina freely gave to all of us. 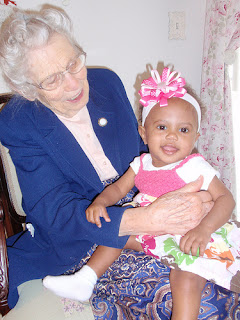