Wednesday, October 2, was Brain Scan Day for Anne-Marie.  It's her first in almost a year.  I'm sure if you're reading this, you're already aware of the situation and don't need an explanation of what a brain scan is and why we're doing it.  (If not, here's the post from a year ago.)

Let me say this first: the oncologist has made it clear that he is NOT concerned with what he sees on the scan.  He is looking at the area of the brain where the gamma knife surgery was performed and wants to know more about the progress of the tumor over the course of the last 18 months.  The way gamma knife surgery works is that the targeted radiation "shoots and kills" the tumor so it dies a slow death.  Right now, the tumor is not growing, but it's not shrinking much either.

Again, the oncologist was clear that it is not an area of concern, but just one where we need more information.  The radiologist is the person who can give us that information.  We'll talk with her in the next couple of weeks. 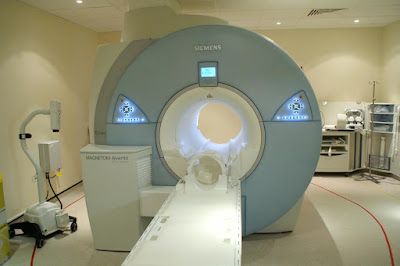 Part two is that Anne-Marie's blood tumor marker is at 35.  The normal number for that is 0-35, so we're at the high end.  Still not a huge concern, but the numbers have been trending upward for the last couple months.  They could jump down into the 20s again by November.  The oncology team cares about these numbers at least as much as we do, so they'll keep a close eye on them going forward.

I will post an update (if we learn anything worthwhile) after the radiologist consult.