Hope Comes in Size 7: A Story of (the) Last Christmas

By the time we got to December of last year, things looked dark. Nothing that the doctors were trying was working. The terms and timelines being used in the process stopped matching any of the reality we were living. Daily life became more about making sure Anne-Marie could function as comfortably as possible and pushing for more time.

That time was Christmastime. By now, I've discovered that I've mentally blocked out a large portion of what happened in December of 2020, but there is one small story from last Christmas that I'll always tell:

It was the week before Christmas and I was behind on everything. Now I had to find a gift for my wife for what appeared to be the least-promising future we'd ever faced. Or should I? Why? Anne-Marie's life consisted of me pushing her in a wheelchair to the car and then from the car to the clinic.

Every year, most of us give gifts to children, but not many of us prioritize buying stuff for those 70 and 80-year-olds in our lives, no matter how much we love them. It isn't until you live in a place like we were that you realize every gift given is with a view of a world that is growing. Our world was shrinking. 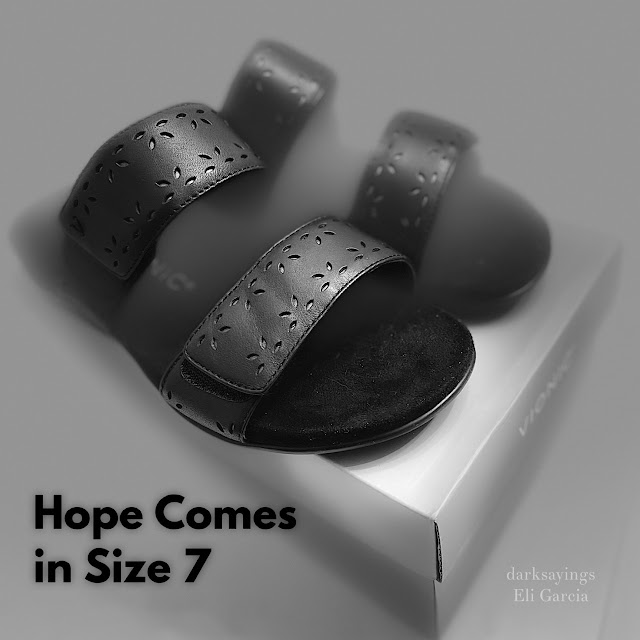 It was getting hard to leave the house even for a little bit, especially considering the pandemic that was raging at the time. I weighed the risks, decided against a shopping trip and started looking online.

I wanted it to be something that was really nice and I somehow decided that Anne-Marie needed a pair of shoes. She hadn't worn heels for a few years because of her health issues, so I needed a nice pair of flats. I wasn't sure such a thing existed, but a Google search lead me to several top 10 lists which lead me to Nordstrom.com. Nordstrom's shipping window was just quick enough to get me what I needed.

I was excited for Anne-Marie to open her gift.  She tore off the wrapping paper and was surprised to find the pair of beautiful flats. I told her, "They're for when you walk again. I thought you'd need something comfortable for church that still looked nice."

For when you walk again.

In the time since, there's not five words that I've ever uttered that have both haunted and challenged me like those five have. Because Anne-Marie took the shoes out of that box and I helped her try them on.  Then she wrapped them back up in all the shoe stuff they give you and put them back in the box and never touched them again for the remaining 30 days of her life.

I can tell you truthfully that in whatever alternate reality I was living in that moment that ignored all the outward evidence and impossible odds that I believed what I said. I could see her in those shoes walking into church on a Sunday morning. I could see us celebrating that 20th anniversary. I could see her watching the kids enter their teen years. I could see it through eyes of faith.

You may think that's crazy talk, but I'll say something even crazier. What I saw that day was what I want to see every day. Even after a year where my past, present and future has been completely shattered, I want to learn to live in that place where I look toward the impossible with eyes of expectation.

Below are my much-less inspiring follow-up thoughts. If the post above was enough for you, just leave it at that. It's fine.

That's where my post is supposed to end. Eli learned his inspirational lesson about faith and expectation and we feel happy about it, but that's not the where it really ends. It would be a bit trite to tell you all that it works like that. What it really is, is that November and December have been emotional labyrinths for me. I miss my dearest friend.

This was her favorite time of year and while feel like our family is doing fine and progressing as well as anyone could hope, this attack of memories--most of them happy ones--has been hunting me for weeks. I'm remembering things from last year that I blocked out for the sake of self-preservation on a near-daily basis.

How could such joy evolve into this bitter hurt that chases me down like prey? I think it's in the developing realization that the fondest memories of my whole 42 years will never be lived again. There are no more of them to be made and that's painful beyond words.

From shoes to walkers to wheelchairs to a hospice bed, what I have now is a pair of flats in my closet that I can't use and I can't get rid of. I wanted to. I'm sure Nordstrom would probably even give me my money back, but I just can't.

We hear songs like "The Christmas Shoes"* on the radio this time of year. For sure, it's a cute song about a few bucks worth of "Heaven's love" when viewed from the eyes of the stranger in line. The entire message is crafted to get you to see it that way, but it's not near as cute when you're one of those kids living it.

I'm experienced enough to write these stories from the passenger seat; to see the big picture. That's not how anyone really lives their life. Living only happens behind the steering wheel and usually at about 80 miles-per-hour. Even in ideal circumstances, we're all just trying not to wreck sometimes.

That all to say this: When you're inspired by the story of a life that's been destroyed, remember that the cleanup usually lasts longer than your warm feelings. That doesn't make your warm feelings bad, because this is often where compassion and so many other good things start. Along with this, however, it's a healthy thing to look deeper into the story. Thank you for enduring mine.

Merry Christmas to each one of you. Hold your family close, if you can. There's nothing worth more.

*I'm assuming everyone gets the cultural reference. If not, click the link keeping in mind that there's major triggers in this thing for anyone who's lived through this. The slight similarities between our story and the Chicken-Soup-inspired song/novella/movie are probably hard to ignore for its many fans. As the end credits always say, "Any similarities are purely coincidental."