It was Juneteenth weekend and--since Galveston is the place where the last slaves were freed--celebrations were still happening, so we took a quick stroll downtown to grab some candy and celebrate some history. All that's great, but we wanted the beach. 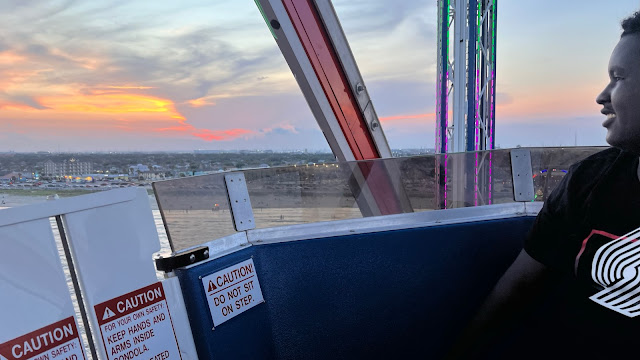 It was a glorious day for our first time at the Gulf of Mexico and we used all of it. I remember going to the historic Santa Cruz Beach Boardwalk when I was a kid and Galveston's Pleasure Pier is similar, just 90 years younger. All the rides, games and corn dogs you could ever want are up on the pier and don't take you too far away from the water. (And you can stand under it when the sun gets too hot.)

And did I mention rides? Let's go back, guys.

Day 16: Galveston to NASA to Lafayette

The official beginning of summer had us leaving Galveston Island to tour NASA. We got to Space Center Houston--which is the tourist side of the property--soon after it opened, but my real hope was to tour Johnson Space Center next door. We booked two tours as soon as we could (Hack: use two different cell phones to book two tours back to back.)

This was one of the few days that was more for me than it was for the kids. I wanted to see the Saturn rocket and the Astronaut Training Facility, but most of all, I wanted to see Apollo Mission Control. Mission Control was restored a couple of years ago to look exactly like it did in 1969 for the first moon landing. Seeing the re-enactment of that historic moment was pure delight for me. 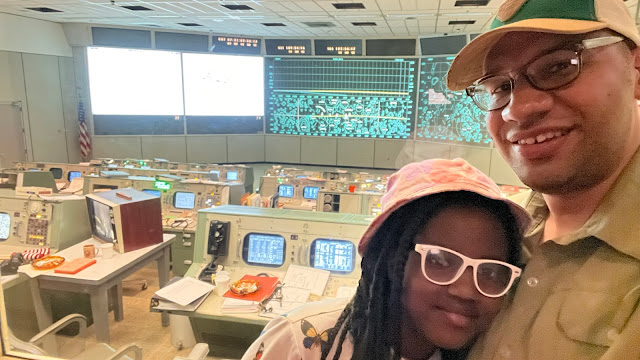 We had our first day back on schedule in a week and a half coming up in two days, so we had to head east. We stayed until NASA closed and drove the four hours to Lafayette, LA. I'm afraid there's not much to Lafayette (shout out to Lauren Daigle), but we enjoyed some genuine boudin and tried not to get eaten by the bugs. 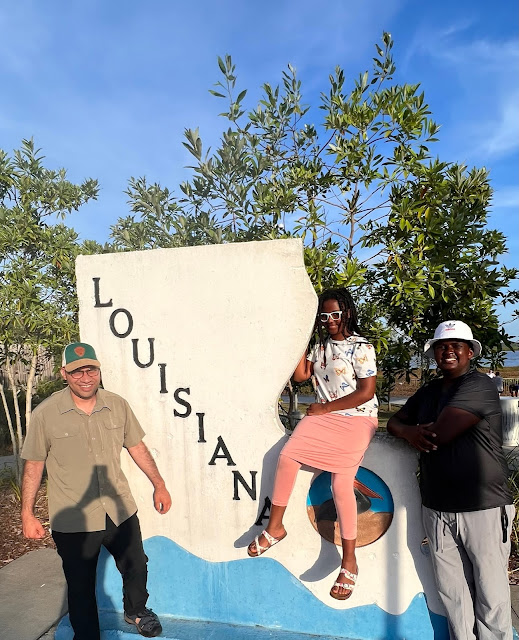 Our night in Lafayette was the result of us not having the will to drive any further (kind of like Tucson), but like I said--we were on a schedule--so it was time for a quick breakfast, but first we took had to see one thing in Baton Rouge, just to say we did.

We chose the campus of Louisiana State University. The historic campus was full of whimsy and wonder as we strolled through the ancient trees and caught a glimpse of Mike the Tiger. One the biggest of our "Big Ten Stops*" was calling us to the Big Easy, so we were out of there.

We arrived in New Orleans with the evening left to go, so it was us moving into of the most fabulous rentals of the entire trip and immediately a block's walk to the St. Charles Streetcar Line. A very, fast walk through the French Quarter got us to our destination at Preservation Hall. We had standing room tickets to see an hour's worth of New Orleans jazz in a crowded room with triple digit temperatures, and it was worth it. From jazz it was jambalaya then Jackson Square.

Things get a bit rowdy in the Quarter when the sun sets, so we decided to head back to Uptown before we got swallowed up in it.

Our first full day in New Orleans started with a swamp tour just outside of town. The two options for most of these tours is the lazy "floatboat" tour or the feisty "airboat" tour. We chose feisty and there's no regrets.

Zipping through Lake Salvador and into network of swamps and bayous was all kinds of fun. Alligators were everywhere and I guess they love marshmallows. An hour on the water fighting sunburn and mosquitoes was worth it, but we had beignets to eat. 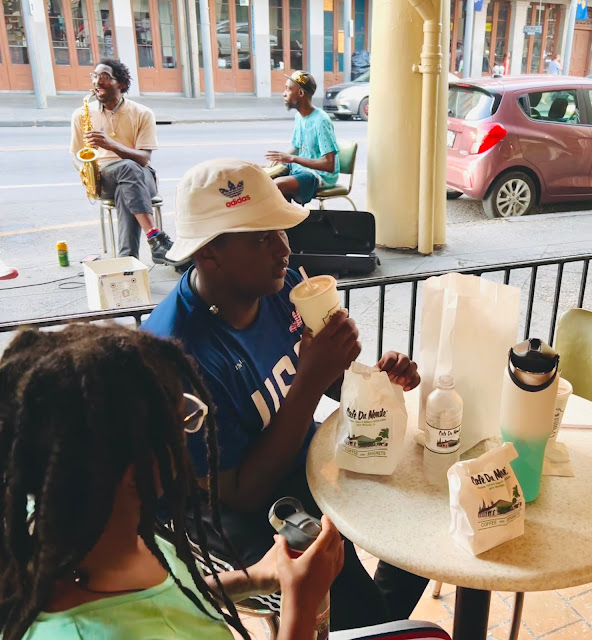 If you're in the Big Easy, do make time to go to Cafe Du Monde and get powdered sugar all over yourself. It's less than four bucks and the only regret to be had is if you choose not to go. (But I don't want to get ahead of my upcoming food post, which I won't take the time to tell you right now about Domilise's mind-blowing po-boys. I'm not even gonna mention them.) 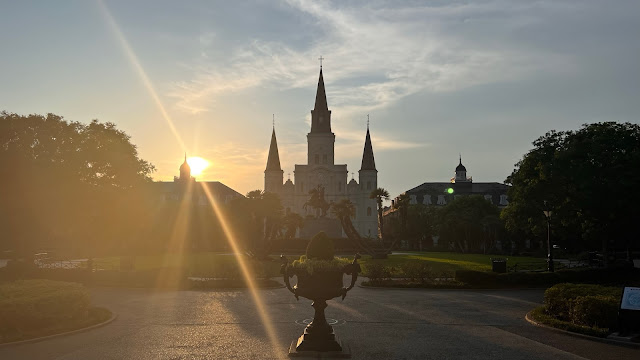 On the nineteenth day, we decided to make an entire day out of visiting the Audubon Zoo. All kinds of beauty is already happening across the street at the Tulane University campus and the hundred-year-old animal park follows right along by being completely gorgeous. Savanna, swamp and pampas are all nestled in the giant oaks and brick buildings. It was tremendously hot, so we spent the afternoon in the Cool Zoo splash area. I think pretty much everywhere in America is hotter than Portland in the summer. 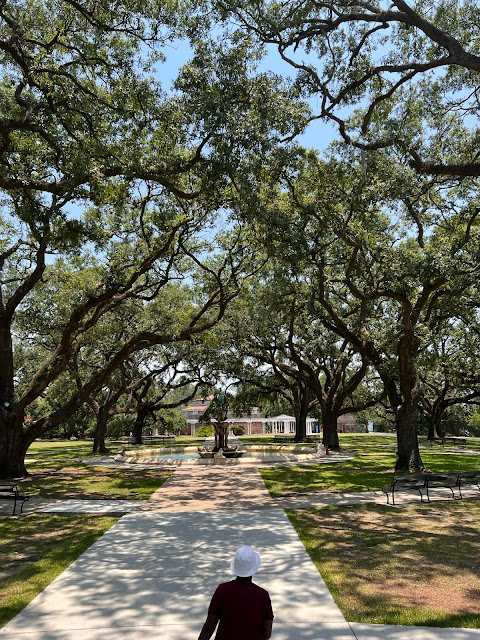 Without doubt, we will return.

We had to say goodbye to our Airbnb early Saturday morning. We wanted to sneak in a trip to Selma, Alabama, but had to make a stop in Biloxi, Mississippi, to say we'd been there.

(Between Biloxi and Selma we snuck in one more driving lesson at an old church cemetery.) 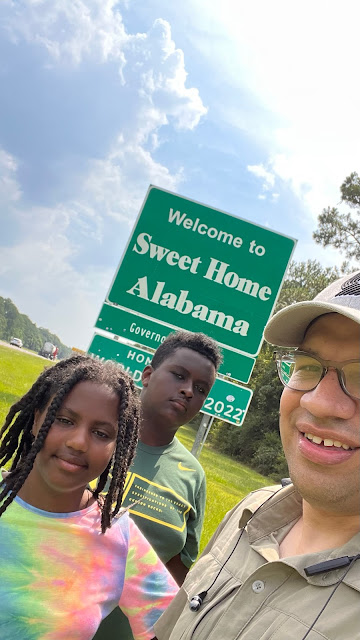 Selma was one of the more challenging experiences of our summer. The kids and I walked across the Edmund Pettus Bridge to the National Voting Rights Museum along the path of Bloody Sunday where so many were attacked and beaten because of the color of their skin. I talked the kids through it as best I could, but the sobering images at the museum were just hard. We left Selma to Montgomery National Historic Trail to the Rosa Parks Bus Stop and that was enough for one day.

No Score for the Selma to Montgomery: It seems disrespectful to boil it down to a number (you should go) 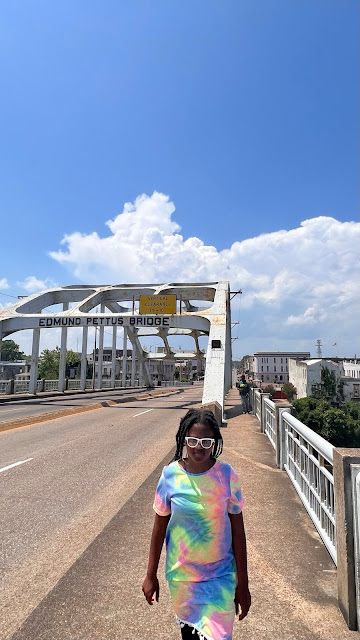 Our friends, John-Paul and Julia had barbecue ready for us at their house on the east side of town. It was time to relax.

John-Paul and Julia founded a church in East Montgomery over 12 years ago. I remember the excitement of talking with them about it back when we were all a little younger. Sunday, June 26, was finally the day for me to see it in person. I was proud to meet the people and celebrate in worship with them in the old church building they bought and fixed up a couple of years ago. 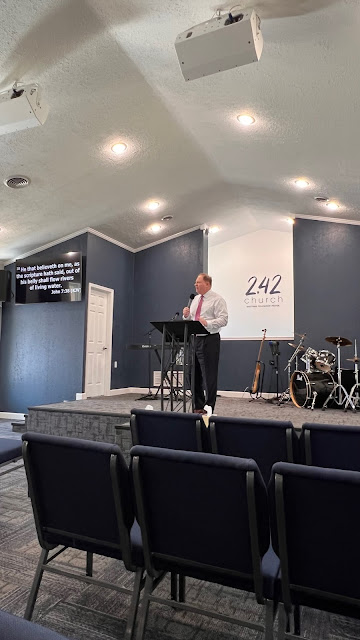 Day 22A: Montgomery to Orlando

This was the last day of the first "half" of our seven week trip. We were headed home for the month of July. We drove eight hours south, parked our car in Orlando and flew home to Portland. The end of July was taking us straight into week four and Walt Disney World. 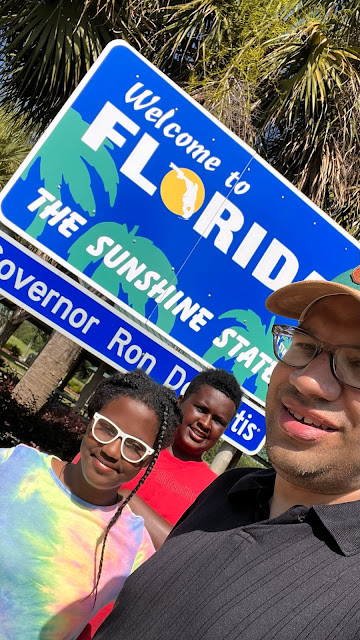