The story 'bout the robin 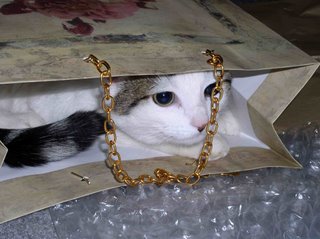 Different versions of this story have been floating around, so I might as well set the record straight.

It was the first night after returning from the hospital, and Anne-Marie could only get comfortable in the recliner. I slept on the couch for two hours at a time between giving the prescribed doses of five different medications. I finally fell into a deep sleep sometime between three and four in the morning.

At exactly 5:00 AM I awoke to this: CHEEEEP!!! Whap! There was a robin flying around our living room. Our cat, Sydney, caught a bird, carried it through her "kitty door" in the wee hours, and then came to show us her prize.

(This may easily be considered natural cat-like behavior to many people reading this. I would agree if our cat was not a complete and total slug. After 13 hours straight laying asleep in the same position, I usually like to take her pulse.)

I woke up just enough to be dangerous. The bird was flying around the ceiling above Anne-Marie as I tried to intercept it. Sydney thought this made the game much more fun as she ran around the recliner waiting for it to come back down.

I realized that the bird was wounded about the time that it landed head down in the magazine rack. When I went to retrieve it, it jumped up and flew across the room to the kitchen window. Oh great! This thing was gonna bleed on our curtains!

When the robin slumped down into a pathetic heap on the windowsill, I formulated a plan to save our window treatments. First, I threw Sydney outside so she would be out of the way. Then, I went to the laundry closet and put on the (size extra-small) cleaning gloves and grabbed the laundry basket.

I returned to the kitchen holding the basket, and crept slowly toward the bird being careful not to allow it to see my movement. When I made it to the center of the kitchen floor, I lunged at the bird and flipped the basket over its head before it could hobble away. I threw the upside down basket to the floor. The bird fell off of the counter with the basket (leaving surprises along the way).

I scooted the basket along the kitchen floor. The robin attempted to peck me through the squares of the basket on several occasions. I avoided the attacks by deftly moving my hands away from the targeted grids. There was no obvious way to get the bird outside that I could see, so I opened the door and slid the upturned basket in front of it. Then, I slammed the door as hard as I could.

I can hardly imagine what the 5:30 AM jogger must have thought as the door of our house flew wide open, then launched a laundry basket and cartwheeling bird down our front walk. I guess I'll never know.