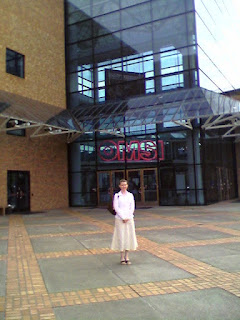 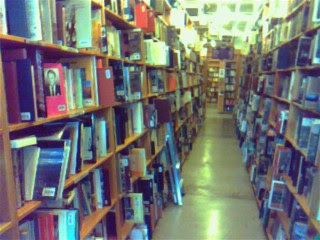 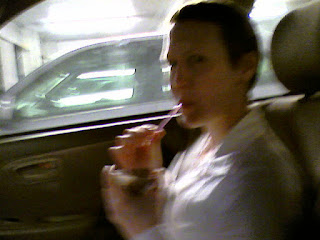 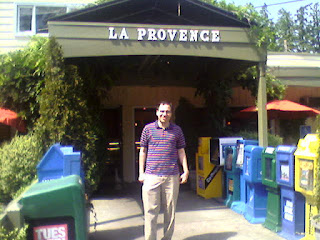 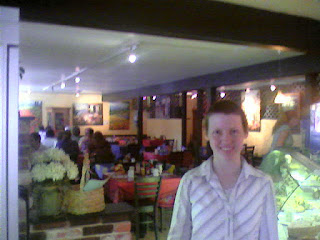 Pics (T-B): Anne-Marie in front of OMSI, the Purple Room at Powell's, finishing chocolate hazelnut gelato in the car due to the crowds, me looking thrilled in front of La Provence, inside the restaurant

We spent this weekend celebrating Anne-Marie's birthday. We spent Friday night in Portland. As soon as I got home from work we went up to the Oregon Museum of Science and Industry (OMSI) Omnimax theater on the East Waterfront. This museum deserves a post all of its own it is so unique and fascinating to everyone who comes through town (and pretty much passe to all the locals). I've been going to this museum since before I remember, and do my best to take it as given that every major city has something like this.

We left the eastside around 8 PM and drove across the river to Powell's Books in the Pearl District. Powell's is the biggest bookstore in the world (68,000 sq. ft.)! We took in the Red Room (religion) and the Purple Room (history). That was enough for us, so we went across the street to Portland's top ice cream shop, Mio Gelato, to get some ice cream. 75 degrees at 9 PM on Memorial Day weekend made for a completely packed house.

We woke in the morning to take Anne-Marie to a long-awaited trip to La Provence, a French bakery and breakfast spot in Lake Oswego (the metro area's most affluent suburb). This restaurant, though very popular, is not in the trendy area of Lake Oswego. I enjoyed Eggs Benedicte, and Anne-Marie had an omelet. The coffee, muffins, and croissants are worth a try, too! From there I dropped Anne-Marie off at her dad's so he could take Fir Point Farms to pick out a hanging flower basket. I went to Tualatin to work on my favorite bridge.

Portland and Lake Oswego both probably deserve their own series of posts. I'll have to think about that one. Maybe a "Top 10 Spots" list for each...
Posted at 11:50 AM

Email ThisBlogThis!Share to TwitterShare to FacebookShare to Pinterest
| More posts about us