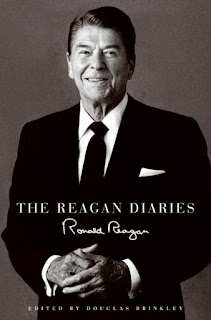 Last Tuesday was the day of the release of the diaries of one of my personal heroes, the late President Ronald Reagan. The diaries were abridged into one volume for the public by Professor Douglas Brinkley. The scholar's set--probably an unabridged box set of three volumes or more--will be released in late 2008.

For now I plan on moving ahead with Truman, but I wonder if this was poor planning due to the obvious appeal of this release. The temptation is to put the 33rd chief executive on hold in deference to the 40th. I probably should stick to the plan. But I do hope to get to this one before the end of the year.
Posted at 9:02 PM

Email ThisBlogThis!Share to TwitterShare to FacebookShare to Pinterest
| More posts about books