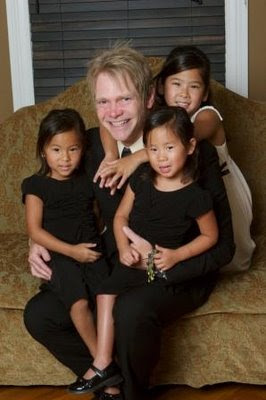 By KATE HOWARD and LINDA ZETTLER

The girl, Maria, was hit in a driveway on the family residence Wednesday afternoon by a Toyota Land Cruiser driven by her teenage brother, said Laura McPherson, a spokesman for the Tennessee Highway Patrol.

McPherson said no charges are expected.

She said several members of the Chapman family witnessed the accident, which happened in Williamson County just south of Nashville.

The brother apparently did not see the little girl, McPherson said. She did not have the name or exact age of the brother, only that he is an older teenager.

Chapman, originally from Paducah, Ky., and his wife have promoted international adoption and have three daughters from China, including Maria.

The singer's Web site said that Chapman and his wife, Mary Beth, were persuaded by their oldest daughter to adopt a girl from China. The experience led the family to adopt two more children and create Shaohannah's Hope, a foundation and ministry to financially assist thousands of couples in adoption.

The Chapmans did missionary work at Chinese orphanages in 2006 and 2007, according to the Web site.

"After our first trip to China, my wife and I knew our lives were changing — our eyes and hearts were opening to how big God really is, and we have wanted to experience more of that," Chapman says on the Web site. "We've really wondered whether or not we should just go to China and stay there. But I don't think so. I believe God is saying, 'I want you to go, get your heart broken, your eyes opened, and then take this story back to the church in America and around the world."'

Chapman also has released a book about being a father entitled "Cinderella: The Love of Daddy and his Princess."

Email ThisBlogThis!Share to TwitterShare to FacebookShare to Pinterest
| More posts about adoption