It was a short conversation with Dr. Smith. (Why did he have to wait until five in the afternoon?)

And so we drove south.  My mom didn't arrive until almost nine and so we knew it would be a late night.  The crazy irony of the whole rush departure is that Priceline put us in a 4-Star hotel Downtown Portland that we'd been wanting to stay in without spending the money.  So it was a midnight arrival at the Hotel Deluxe.

The hotel is a one of a kind boutique style deal right in the middle of a bad neighborhood.  It's a kind of art deco, 1940's-kitsch style place that has dedicated it's seven floor to the memory of the golden age of film.  There's velvet and mirrors and that war-era green all over the place.  We checked in at midnight and finally walked to get dinner at a hole in that wall called Cassidy's.  The place is next door to Crystal Ballroom, so people were filling the restaurant as they were leaving the concert of whatever local band . The place was packed out and loud.  It was just slightly scary.  Man, I love Portland. 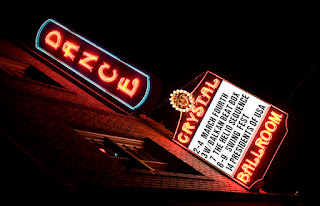 Food was cheap and delicious and we got out of there at almost 1 AM.  When we got back to the Deluxe we saw Dean Martin in the lobby.  Or maybe I was just hallucinating since it was past my bedtime. 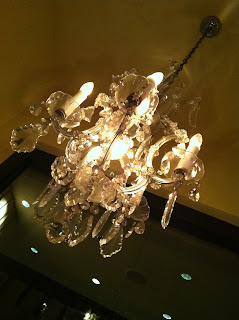 When we woke up in the morning, we took a quick walk around town to see the sights on the mean streets of the Goose Hollow neighborhood.  The local soccer team plays here: 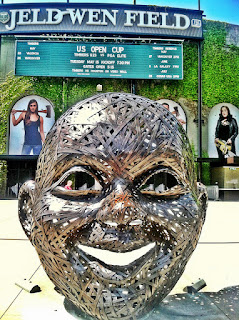 Our sightseeing didn't last long since Portland was really only a waypoint for our drive into the desert.
Posted at 6:34 PM