I already posted a story almost identical to this one last October.  The difference this time is that the person that's talking about her personal experience is famous.  Very famous, really.

Angelina Jolie posted about "My Medical Choice" of having a double mastectomy for preventative reasons.  (This is where I insert the disclaimer that this post will have some sensitive and frank talk about human female anatomy, so if that's not gonna work for you, please move on and read something else.) 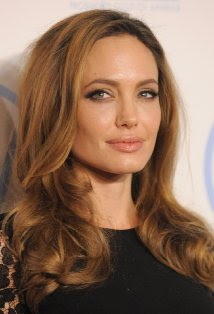 What does that mean in English?  She had both of her breasts surgically removed because she wanted to remove the threat of ever developing breast cancer. I'll reiterate: Jolie never had cancer.  She had the surgery because breast cancer runs in her family and because she had genetic testing that confirmed that.

Anne-Marie was in a similar situation about 7 1/2 years ago and planned on having genetic testing done to see if she had the same gene mutation that caused cancer in her grandmother, mother and aunts.  Before she could get the testing done, she was diagnosed with cancer.  She subsequently had surgery to remove the cancer, along with breast reconstruction, which was similar in nature to Jolie's surgery.

The reason we're writing this particular post is because now--for probably the first time--people that previously knew nothing about hereditary breast cancer are talking about it.  We thought we'd go through the Jolie article point by point and comment on it with our experiences.  This is not necessarily to criticize Jolie, her opinions or her choice.   We just want to give you our perspective. (read the article here, or the rest of this post won't make sense)

...They have asked if the same could happen to me.  I have always told them not to worry, but the truth is I carry a “faulty” gene, BRCA1, which sharply increases my risk of developing breast cancer and ovarian cancer.


The term BRCA is very common in the breast cancer community.  Anne-Marie carries the BRCA 2 gene mutation.  The difference between the two is that BRCA 1 often doesn't respond to hormone treatment.  The small upside is that (obviously) BRCA 1 treatments don't mess with your hormones.

...the risk is different in the case of each woman.  Only a fraction of breast cancers result from an inherited gene mutation.  Those with a defect in BRCA1 have a 65 percent risk of getting it, on average.


The numbers for this keep changing.  And it's true that most breast cancer isn't hereditary, but the people that need to be most cautious about the situation are the ones with family history of genetic breast cancer.  I hope that makes sense.

...I started with the breasts, as my risk of breast cancer is higher than my risk of ovarian cancer, and the surgery is more complex.


She means the breast surgery is more complex than the ovary surgery.

...On April 27, I finished the three months of medical procedures that the mastectomies involved.  During that time I have been able to keep this private and to carry on with my work.


OK.  This is where our perspective and personal experience diverge from Jolie's.  Three months is pretty fast. If you did it all in three months, it would be a very difficult three months. Actually, that's a bit of an understatement.  As far as "carrying on" with your work?   If you could work in bed (and some might have that set up), then it may be possible.  At least, in our personal experience

...My own process began on Feb. 2 with a procedure known as a “nipple delay,” which rules out disease in the breast ducts behind the nipple and draws extra blood flow to the area...it increases the chance of saving the nipple.


Jolie later writes in this same article that the testing costs around $2,000-3,000.  As far as I know, the basic test actually costs more like $300, but I think her cost was much higher because she had procedures like the one described above.  To the best of our knowledge, NO ONE under normal circumstances is doing procedures as in-depth as this (that is of course referring to those already diagnosed, since there isn't a large group of people telling their stories about purely preventative surgery as of yet) and not everyone gets that $3000 version of the test. So while this sounds great, I don't think it's common or even an option for most.

...It does feel like a scene out of a science-fiction film. But days after surgery you can be back to a normal life.


It depends on what your "normal life" is like.  At the time of Anne-Marie's first surgery she worked a physical, hands-on job.  So, not even close.  She probably could have been back at work in three to six months.  We'll tell you why in a second.

...There have been many advances in this procedure in the last few years, and the results can be beautiful.


Not that we're aware of.   Maybe there has been for those for whom money is no object.  If she means in the last 10 to 15 years, then yes.  Advances have been made, especially since the Women's Health and Cancer Rights Act of 1998 that mandates that insurance companies cover reconstructive surgery for breast cancer survivors.  This made the demand for skillful reconstructive specialists and techniques rise dramatically and thus, the results are better.
Returning to what I mentioned above: one of the biggest reasons that the recovery is so difficult (and would make it nearly impossible to get back to "normal life" in a few days) is that the surgery involves the placement of "expanders" under the muscle wall of the chest.  They peel it up and jam what amounts to two rigid water balloons between the muscles and rib cage and incrementally fill them with saline injections (read: needle) in order to stretch the muscles and skin to hold an implant.  Really.

This amounts to a vice-like affect on the chest and lungs, so doing anything active would be pretty difficult while this process is going on.  It takes three to six months for a lot of people.

...My chances of developing breast cancer have dropped from 87 percent to under 5 percent. I can tell my children that they don’t need to fear they will lose me to breast cancer.


Like we said, the percentages change a lot, but this sounds pretty close.   As far as telling your children that they don't need to fear losing their mother: it's not technically true, but we would tell our children the exact same thing.   Even considering that Anne-Marie is the one that didn't make the percentage.

...It is reassuring that they see nothing that makes them uncomfortable. They can see my small scars and that’s it.


True.   After three months your kids wouldn't see anything.  Small scars?  I think Jolie's procedure was different than what the average woman would have, but the scars could be considered small.   Probably just a few inches.  That really is small considering what they're doing.

...I do not feel any less of a woman. I feel empowered that I made a strong choice that in no way diminishes my femininity.


This should be true for all women because the shape of your body doesn't define who you are.   Hopefully, Jolie has a group of people around her that are affirming her through all of this.  We think that some women probably would struggle with feeling diminished femininity.  Not saying that's a correct perspective, but it happens.  A lot.

...We managed to find moments to laugh together.  We knew this was the right thing to do for our family and that it would bring us closer.  And it has.


It makes us happy to hear this and we agree.  The experience does bring you closer and the value of that shouldn't be diminished.

...For any woman reading this, I hope it helps you to know you have options...It is my hope that they, too, will be able to get gene tested, and that if they have a high risk they, too, will know that they have strong options...Life comes with many challenges.  The ones that should not scare us are the ones we can take on and take control of.


Yes.  Now we examine the overall point.  This is why we think what Jolie is doing is a good thing.  Not just her decision, but speaking out about it.  Options are available and she's doing us all a service by making us aware of them.  As I mentioned above, the basic genetic test is probably more in the $300 range.

Sure it's not fair that people will listen to her and not (the aforementioned) Allison Gilbert, but this disparity should come as no surprise. The high visibility of this specific situation gives us this unique opportunity.   That's why I'm writing and you're reading right now.

Trust us when we say that you do not want to go through chemotherapy or hormonal therapy treatments.  If becoming educated about genetic testing will keep someone from this, then we applaud Jolie for having the courage to tell us this very personal story.
Posted at 9:22 PM