You'd think I'd have had enough of the Kennedy story.  The whole story feels like an overused tragedy.  I've heard enough Kennedy stories to satisfy my curiosity and taint my view of the American presidency.  However, Professor of History Robert Dallek produced a book so engaging, I had to get all the way through it.  OK, so this book came out 10 years ago, but I read it in 2013.  Appropriately 50-year mark of Kennedy's death.

(To be honest, An Unfinished Life: John F. Kennedy, 1917-1963 sat on my shelf for just about as long as Kennedy was in the White House before I surrendered to it.  Still far from being my record [looking at you, The Great Bridge!]) 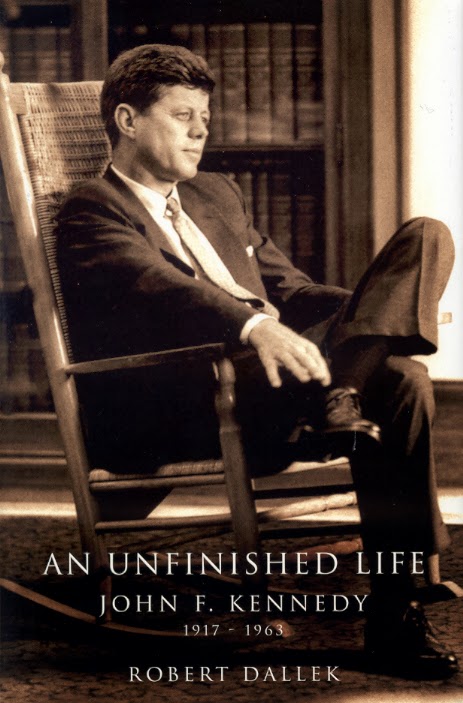 I hesitate to give the "very bad" label to anybody knowing the weaknesses of my own heart and character, but the life of John F. Kennedy reveals so many interesting things about the line between image and integrity, policy leadership and principled life that I believe the frank opinion is necessary.

For every Kennedy story I love there are a dozen that make me nauseated.  Dallek covers them brilliantly in his narrative that weaves policy triumphs with personal blunders.  Where he most shines is in his outlining of Kennedy's medical problems.  (And he ought to since Kennedy's medical records previously-sealed medical documents were released exclusively for the writing of this book.)  The level to which the author describes the entire Kennedy family concealing the truth about their favored son's multiple health conditions is appalling.  It was enough to bamboozle the public for decades and--if I may--it was wrong.

The remarkable thing about Dallek's Kennedy is that he didn't attempt nearly as much to conceal his appalling promiscuous behavior as he did the truss that held his lower back in place.  This apparent personal apartheid was something Kennedy carried everywhere.  The author allows us room to theorize that longing for parental approval, redeeming his older brother's death and feeling that his own death was always near were the motivators for his contradictory behavior.

Ignoring the problems with the war he started with Vietnam were ignored in favor of an incredible tactical victory over the Soviet Union during the Cuban Missile Crisis.  His visionary speech is credited with sending a man to the moon, but his clumsy narcissism sent his (otherwise) innocent mistress back to her native Germany for good when suspicions arose.

And on and on the stories could go.  I want to thank the author for reminding me that doing great things isn't the same as being a great person.  President Kennedy makes me feel proud and ashamed in the same breath.  I hope that's never said of me.

I highly recommend this book, especially if you are unfamiliar with the life story of John F. Kennedy.
Posted at 10:55 AM

Email ThisBlogThis!Share to TwitterShare to FacebookShare to Pinterest
| More posts about books, concepts