(I love how I have to start the post by specifying which biopsy I'm talking about.) 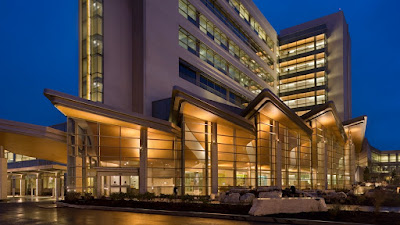 The biopsy to figure out what was happening near Anne-Marie's collarbone was the morning of Tuesday, January 10. Actually, not really. It was scheduled for the morning but was moved to the afternoon at the last minute.

We checked in at 1:30 only to find out that the OR had been full all morning with emergencies sent over from trauma. So almost four hours of waiting in short stay put Anne-Marie getting wheeled back to the OR around 5:15 PM.

I sprinted to the cafeteria to eat but the surgery was so short I got the call from Dr. Storm before I was finished eating. Two suspect lymph nodes had been removed. Everything went fine, but as usual, recovery and discharge took another two hours.

We checked out at 8 PM to blizzard-like conditions. Weather forecasts vastly underestimated one of the worst winter storms in modern Portland history and we could nearly have gotten stuck at the hospital five miles from our house.

Thankfully we still have a gigantic SUV and we slowly headed toward our house. Anne-Marie hadn't eaten since breakfast, so she requested some food. The people at Arby's looked scared to death as they saw snow blowing sideways through the windows. I wanted to tell them to just go home. After they made me that Jr. roast beef.

It took nearly a half hour to drive the five miles, but we made it home around 9 PM. Our kids--stuck with the sitters in traffic--made it home an hour later.

All of that process got us to the post-op on Monday, January 16. The results? Nothing.

They didn't find a thing. The lymph nodes may have been inflamed from a virus Anne-Marie had around Christmas. The remnants from whatever it was were still there in the OR, but it was NOT cancer.

So we're thankful. It means we fight another day. And, yes, we know in our in the back of our minds that Dr. Smith will probably schedule us to go in for a lung biopsy (aka get stabbed in the chest).

Right now, we're focused on going to Disneyland in a few days. I think cancer can wait until we're back.
Posted at 9:54 PM