It's been eight years since this post. President Barack Obama is done. Of all the people that may be excited about that, I'm sure the President is most of all. 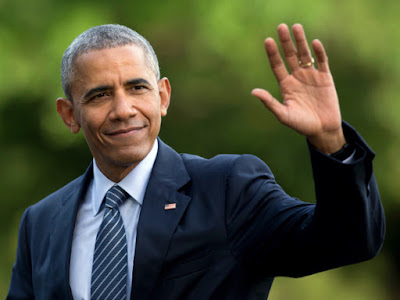 In these eight years since I (mostly) set aside the subject of politics on the blog, the intensity of partisan discussion and voluntary offendedness has increased massively. Enough so that I now hesitate to write a post on this subject.

(But it's never worked for me to not be respectfully real.)

One of the things I've always loved about President Obama is the affection he has for his family. His love for his wife and daughters is obvious for anyone to see. I think it's healthy for a nation to see its leaders doing and being what dads and husbands (or whatever the role) ought to be.

I have appreciated the Presidents's ability to keep his sense of humor and keep his tone measured in tough times. Many times he's chosen to fight back with his wit instead of with personal attacks. That ability is a gift that most people--that even most presidents--don't have.

I wish one of these things would be the first memory of our outgoing president, but unfortunately one thing will always push its way to the front:

I will never forget my cancer-stricken wife spending hours on the phone at the end of 2013 trying to fight her way through the system as her health insurance was in the process of being canceled by the Affordable Care Act just days before the biggest surgery of her life.

That happened. It was horrible. We got it worked out, but were fought every step of the way by that thing they call Obamacare.

I could get into ISIS, the NSA or unemployment. Conversely, I could talk energy prices, the demise of OBL, or the Dow Jones. I think when it affects your family it's different, especially when it's on that personal of a level.

I know that many of you did not have our same experience and that you may have different feelings about the ACA and the Obama administration, but in this house we are forever marked by that two weeks of panic during the darkest season of our lives. Knowing the situation was a direct result of partisan legislation driven primarily by the President (and a situation we saw coming for four years) made it even more difficult to swallow.

I acknowledge that the Presidency is a tough job. I know I wouldn't want to do it. The pressure, lack of sleep, criticism, knowing guys want to kill you everywhere you go. I could never do it.

Thank you, President Obama for your service these last eight years. While I strongly encourage you to stay out of the healthcare industry, I can always appreciate that you endured many long days and long nights to do your job. May you find non-political and stress-free ways to occupy your time from here on.

Email ThisBlogThis!Share to TwitterShare to FacebookShare to Pinterest
| More posts about in the news