I'm not sure how to say this

Two weeks ago, after a long interview process and getting all kinds of counsel and advice from people I trust, I resigned my position as Project Manager at Centerline and accepted a job offer at Acom Consulting. That's what this blog post was supposed to be about.

In the week leading up to my departure from the company, Anne-Marie was scheduled for a biopsy at PeaceHealth Southwest Medical Center here in Vancouver to take a look at another swollen lymph node.

You may remember that we went through a nearly-identical process early last year which resulted in us discovering sarcoidosis (benign granuloma tumors) throughout Anne-Marie's body.  The treatment for that—while successful—has been incredibly difficult and is a lot of the reason why you haven't heard much from me since last summer, either in person or online. 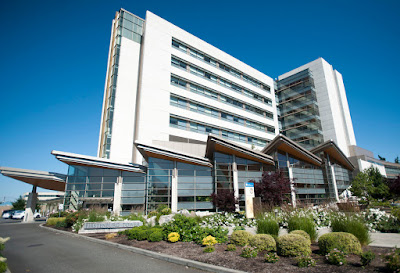 The location of the new area of concern was about an inch away from the one from the one I just mentioned and was causing Anne-Marie pain off and on.  Anne-Marie brought the issue up to the doctors in April, but her concerns were mostly brushed aside since the nearby area from last January was resolved as a non-threatening situation and was being treated.

The coverage of the quarterly CT scans fell just short of this area, so it was considered unknown.  Nothing could be proven either way, yet Anne-Marie persisted for eight months with her concern and that's how we got last week's biopsy scheduled.

The oncologist and surgeon opted to biopsy rather than altogether remove the "inflamed lymph node".  Tuesday the biopsy was performed; Friday we found out that it wasn't another lymph node.  It was a tumor.

A malignant tumor just under an inch in diameter was found at the base of Anne-Marie's neck.  It has tested as a positive match with the other cancer, which means it has spread.  It is inoperable.

Now that that's been said: we all try to put a positive spin on this kind of news to make it more palatable for people, right?  Well, I'm having a pretty hard time with this one.

The battle lines have been drawn.  Treatment starts next week.  In God we trust.
Posted at 8:40 PM