Today was my daughter's 9th birthday.  This day was different because her birthday wasn't the biggest event in her life.  Today Mariah started at a new school.

A week ago, I had to tell Mariah that Mommy was too sick to continue homeschooling.  She cried and asked what we were going to do.  I promised her that we would find her a different school that would still be a Christian school, because that was important to her.  We talked a while about it, then she ended the conversation by saying, "It's OK.  Whatever is best for Mommy." 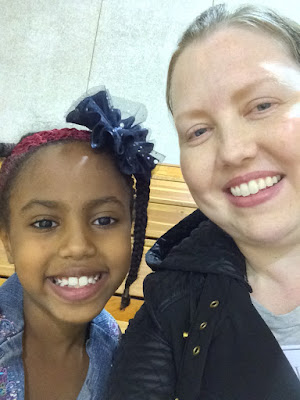 This has been a devastating thing for us.  We put Mariah in homeschool because we believed it was the best thing for her.  After two years of distractions, our primary focus last summer was to put our children in a place where they could thrive.

But things change.  Over the course of the fall, Anne-Marie began feeling progressively worse.  We didn't initially think that it would come to this, but after two weeks trying to make a decision, it was the right thing to give Mariah a consistent education plan.  Thankfully, after a couple of days of arm-twisting and begging, a spot opened up at Elisha's school.  Our experience at his "big Christian school" so far has been good and we hope that this will end up being an accidental fit for Mariah.

The night of our talk, Mariah went up to her room and played the same song for the next hour from an old CD she found in our basement:

Email ThisBlogThis!Share to TwitterShare to FacebookShare to Pinterest
| More posts about announcements, family