Where we find ourselves, part one

After identifying a tumor at the base of Anne-Marie's neck in January, she was prescribed an indefinite regimen of the IV antibody treatment Herceptin combined with Perjeta. While we were hoping for that 2nd treatment breakthrough, but instead our next appointment with the oncologist revealed that--for the first time in 12 years--Anne-Marie's cancer has mutated.  It is no longer feeding on the same type of hormones and the things we've been doing since 2006 will no longer work.  The Herceptin treatment was ended after just one treatment.

The first step in attacking this new cancer was with Ibrance, an oral chemotherapy.  Anne-Marie once again pushed for more and requested local radiation on the tumor, if for no other reason to relieve her of some of the pain the tumor is causing her.  Although it wouldn't technically "cure" anything, the oncologist agreed that it would likely help the pain and gave Anne-Marie a referral for radiation along with the first month of chemo pills.

The radiation consult a week later took forever.  The radiologist talked for too long about what the process was and how it happens. We've done it before and I was ready to move on.  From there, the tech took Anne-Marie back to create a guide mask to more accurately direct the radiation beam to the tumor site.  Part of this process was doing a CT scan in that area since January's biopsy was located visually (the tumor is visible/can be felt with Anne-Marie's direction).  The CT would help map out the tissue in the area around the tumor. 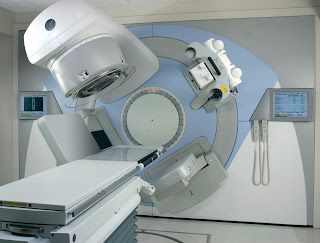 After more than an hour waiting for the scans and molds to complete Anne-Marie came back to the waiting room, but the scheduler told us not to leave. The radiologist wanted to do a second consult with us. At this point I was getting irritated. It seemed like they were dragging out this process on purpose. We were waiting for the third time in the same appointment and after ten minutes, Anne-Marie went down the hall to get some answers.  The medical assistant was coming the opposite direction down the same hall to get us and nearly ran into her.

We were brought back to the exam room again and were only given a few minutes to sit in confusion before the doctor came in.  She informed us that the mapping CT they just performed had found cancer in Anne-Marie's brain.

By morning Anne-Marie's oncologist and pulmonologist added their opinions.  Cancer.

(This post will be followed soon with the second half of the story.  For now I need to go to bed.)