Gamma rays (and the return of Tykerb)

Orignally, we were scheduled for the 14th surgery--the removal of the 2nd brain tumor--on Thursday, April 5, but our team of doctors canceled that and presented us with a different plan.

On April 3, our radiologist presented us with an alternative to conventional brain surgery.  What they presented to us is a procedure called Gamma Knife Radio Surgery.  This procedure involves synthetically produced supernovas that force the decay of cobalt which gives off an afterglow of gamma ray photons.  Seriously.  Or something like that.

Not to be flippant, but this kind of science is most famously known for accidently turning Dr. Bruce Banner into the Incredible Hulk.
Well, science fiction has become reality and the gamma rays procduced by the cobalt in the gamma knife machine are used to burn up cancer cells in the brain.  200 beams of gamma are blasted from the machine through a special helmet that focuses the rays toward the exact location of the tumor and somehow misses all the other healthy cells in the brain (the team of doctors has assured us of this).  The effectiveness is estimated to be at about 90% of the traditional surgery. 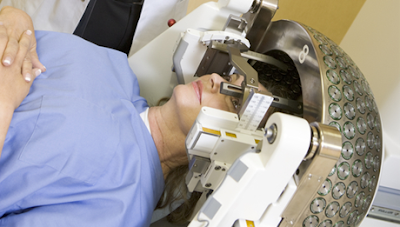 Conventional surgery would involve a few hours in the OR, two days in the ICU and another day or two in the hospital beyond that with a month recovery at home.  Gamma knife involves three to six hours in the machine and then straight home to recover for one day.  You can see why we chose the latter.

By the time most of you read this post, we will already be at the Gamma Knife Center at Providence Portland.  The idea of being part of what seems like a mad science experiment* makes us both a little anxious, but after going through the last five weeks following surgery, we are willing to give it a shot.

We will take it easy these next few days as Anne-Marie recovers.  But there's two more things:

First, Anne-Marie has been place on a schedule of normal, traditional radiation that has nothing gamma about it.  She goes in every morning and will be for the next two weeks to help alleviate the pain from one of her ribs on the right-hand side.  Thankfully, we get tomorrow (the day of gamma knife) off.

Second, the advanced pathology on the first brain tumor revealed that it was not the same type of cancer as what was found back in early March.  In other words, the cancer has mutated in some places but not others, so our original plan of treating with Herceptin/Perjeta was scrapped and now the second plan of treating with Ibrance has ended.

The cancer we are dealing with can only be starved out by certain targeted chemotherapies, so our new option is a combined chemo treatment of Xeloda and Lapatinib.  Lapatinib is also known as Tykerb.  If some of you have been reading this blog for a long time, you may remember our horror stories (<<<click the link and read about it) of Anne-Marie's first attempt at Tykerb.  We were pretty shaken to hear that's what the doctors were recommending.

The issue that is really driving the risky decision to try this chemo is caused by the blood-brain barrier.  There is a shield that your body has that protects your brain from any nasty invaders that also prevents treatment from reaching where it's needed if you have something that needs fixed.  Tykerb is the only approved treatment for this.  So it needs to work.

They are choosing to frame this attempt with the frighteningly-optimistic philosophy of "maybe this time will be different."  Considering the gravity of the situation, this seems like pretty sound logic to me.

Tykerb starts sometime during the coming week.  God help us.