That’s what Dr. Gotkowitz told us about Anne-Marie’s newly-scheduled surgery.

The options on the table were:


The discussion of option 4 was what prompted the phrase urgent, not emergent.

“It will take three or four months before symptoms start to develop.”

I won’t get into the list of symptoms, but they made things seem pretty emergent to me. Gamma knife promised 90% effectiveness of conventional surgery and only 24 hours of recovery (compared to a month). Anne-Marie quickly made her choice.

Gamma knife surgery was scheduled for April 16 at a Providence Portland Medical Center and would be performed by our neurosurgeon, Dr. Modha and the radiation oncologist, Dr. Gotkowitz.

Gamma knife is in the sub-basement and only two or three people at a time are admitted each day. We got in at 6 AM. We were second (last) in line. 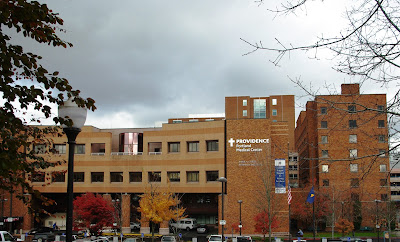 The process started with installing a giant clamp that was literally bolted to Anne-Marie’s head at four points in order to keep the head from moving during the procedure.  It looked cumbersome and painful. Plenty of local anesthetic was used to help with the pain.

Other than the clamp, the process was very relaxed. Brain scans were done first to map all possible issues. Everything on the scans came back looking great. No new tumors. No growth of tumors. No recurrence.

Anne-Marie returned to the room for two hours while the doctors formulated their plan for how to best remove the tumor with the gamma and then came and walked her back for the hour and forty-five minute procedure.

By the time they walked Anne-Marie back to her room, my brother-in-law Mike had joined us. The team of doctors came back and told us everything went perfectly, we sat and talked for an hour and then they sent us home.

In the almost week since the gamma surgery we have continued a conventional radiation plan (to ease pain in Anne-Marie’s bones), the kids have been in school and I went right back to work on Tuesday. Anne-Mare has dealt with a lot of headaches and fatigue since, but other than that is all right.

Dr. Smith changed course on the Tykerb chemo and is letting us wait until this coming Thursday. That’s the next big step.
Posted at 8:12 PM