Anne-Marie and I went in for a consult with the pulmonologist on Thursday, February 22, to talk over the lung biopsy ordered by Dr. Smith (the oncologist) a week before.  In short, the reason for the consult was to see if we could identify whether the enlarged spots found in Anne-Marie's right lung were cancer or if they were benign (sarcoid/granuloma).

Dr. Knewton Sakata is the pulmonologist and the chaos began as soon as he walked in the door.  He wasn't exactly sure what we were trying to accomplish by requesting a biopsy.  After looking through multiple CTs and MRIs, he concluded a bronchoscopy was already attempted in this same area and failed (during this craziness).  They couldn't reach the area back in 2017 and ended up abandoning the biopsy.  The best evidence we got from that series of biopsies at the time was that everything was benign. 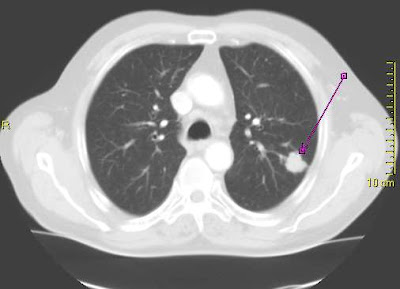 We went back and forth over 2 years of scans and what spots in the lungs grew when and whether those spots were cancer or not.  After an hour of animated discussion and a call between the oncologist and the pulmonologist, we came to these five things:

I appreciate that Dr. Sakata was able to come right out and say "I think it's cancer".  It's disappointing, but the scale of disappointment has been scaled up significantly in the past three years, so we're good.  Good as we can be.  Having a plan of what to do next is now our focus more than two (more) spots of (maybe) cancer.

I will try to give a really bland update about PARP inhibitors, how they work and what that means for us soon.
Posted at 11:27 AM

Email ThisBlogThis!Share to TwitterShare to FacebookShare to Pinterest
| More posts about diagnosis, testing