Anne-Marie has had 13 surgeries.  But with the exception of having my wisdom teeth out in 2005, I haven't had any.  Thursday that will change.

I could tell you about all the steps that got me there, but it really started here in the Spring of 2007.  I went through a month of tests back then that ended up revealing that I had problems with acid reflux and/or its more severe cousin, GERD.

Around 2012, the problem slowly started getting worse and by the time we got to 2019, I brought the issue to my doctor went through multiple tests and consults to see what my options are.  The allergist and dermatologist had a few tips on what might help but, at my request, my trip to the gastroenterologist resulted in something much more involved.

The consult with the gastroenterologist revealed a years-long story of symptoms that she'd heard many times before.  I had already pushed for them to take this issue to the next level of treatment, so the doctor started by changing me off the Prilosec mentioned in the 2007 post above and putting me on another medication called Protonix.  From there, I went off all medication and had what they called a "Bravo" sensor placed in my esophagus and had a receiver hung around my neck to measure the severity of my heartburn.

I hadn't been off heartburn/reflux medication for 13 years, so the testing period was a crazy experience. The receiver looked like an alarm clock with a neck strap on it and three buttons. The buttons were for me to press any time I experienced symptoms and I ended up playing that thing like a piano. 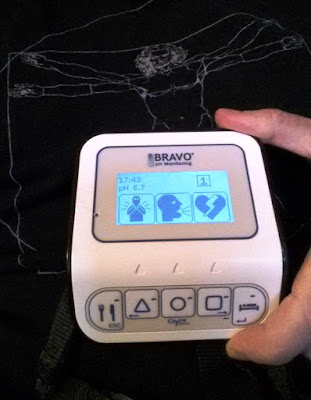 The results came in early this month.  The average person scores between 2 and 4 on the Bravo test.  In order to officially be considered a "heartburn sufferer" and considered for surgery, you need to score above a 15.  I got a 70.

That's in the top 5% of heartburn/reflux/GERD sufferers in America, so I'm headed for surgery.

The surgery is called fundoplication and the process sounds fairly disgusting to me, but you can click this link to get a basic understanding of it.  The surgery will only take two to three hours, but I'll probably be in the hospital for a day and be on a restricted diet for six weeks.  Overall recovery to get back to "normal" may stretch out to six months.

They're hopeful that after Thursday, I'll never have to use any type of antacid again.  After years of restricting my diet and having difficulty sleeping, I believe it will be worth the trouble.
Posted at 8:00 PM