People all around the world waited for the child's arrival. Prayers went up, longing for the day to come. And when that day came, life changed forever.

It's the story of something God did one amazing night in December.

A year ago, I told the story of Brad and Steph. Actually, it wasn't THE story, only part of it. In my part of the story, Brad and Steph's two sons just wanted to help. Their parents heard that there were kids that didn't have a home and wanted to help bring one of them to be part of their family. It costs a lot of money that their family didn't have to do this, so the boys came up with a plan. 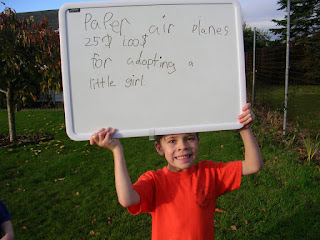 I remember talking to Steph last summer as they were starting this process. She knew their family was supposed to adopt a girl from Ethiopia, but they didn't have any money. (When I say they had no money, I mean no money. As in $0.00.)

I remember telling Steph, "If you believe God has called you to do this, nothing can stop you." Then Anne-Marie and I told her how God had blessed us with the money to adopt our two kids and how He changed the plans of the Ethiopian government to assure their arrival at the end of the summer.

Turn the clock forward 16 months, God DID supply the money for Brad and Steph. And He helped them find a little girl that needed a family, Eve. Just before they left the US to get Eve in Ethiopia, things started to go wrong with the legal paperwork. 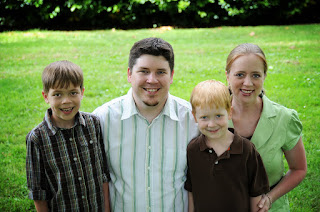 The court process was not working and they weren't able to legally grant custody of Eve to her family. Brad and Steph and the boys left for Ethiopia anyway, having the faith it would be straightened out when they got there.

The legal process went into a complete tailspin. Family and friends around the world were praying that God would work a miracle and allow Eve to go home with her family. Then Brad and Steph's lawyer called and told them, "Your case will not be resolved for a month or two. I recommend you go home." As the family rescheduled their return trip on Christmas Day, the adoption agency told them that--due to the legal system and government--Eve may become ineligible for adoption.

The family wondered as they packed for home if they would ever see this precious little girl again. We all watched as what we had prayed, waited and hoped for began to slip away.

Then, sometime between December 22nd and the morning of December 23rd, Eve's first birthday, something changed. The legal system straightened out and the court battles ended. Eve went from being another forgotten child in an unfair world to being the daughter of a loving family. Brad and Steph received the surprise call from the same lawyer that had told them to go home a few days earlier. It was over. Eve was theirs forever.

Of course the family canceled their Christmas Day return flight. Instead they plan to spend Christmas in Ethiopia as a family of five.

And somewhere in the midst of all the darkness and doubt, God provided an answer just like He did 2000 years ago. Just like He did for us last summer. Just like He'll do for you if you'll let Him. The night isn't as dark as you may think and He's not so far away that He doesn't hear. His light can break through the shadow and shine down with hope for just one more little girl. 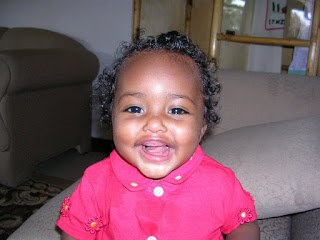 Email ThisBlogThis!Share to TwitterShare to FacebookShare to Pinterest
| More posts about adoption, holidays