A year and a half ago, we met a woman named Sarah when our kids were playing at the same play area.  She (like us) had a conspicuous family that sure looked to us like it had some Ethiopian kids in it.  When we approached her to talk about it, we found out our hunch was right.  Bekah and Benji were indeed adopted from Ethiopia.  We found out we lived not only in the same town but on the same street, so we exchanged phone numbers and promised to keep in touch.

We became fast friends with Sarah and the kids over the next few months and were heartbroken when we found out that--due to some very tough stuff they were going through--she needed to move back home to the D.C. area.  At the same time we heard this, we found out that Anne-Marie's cancer may have returned.  In fact, the last time we saw Sarah, she was babysitting our kids while Anne-Marie went to the last biopsy for diagnosis.  It was a crummy way to say goodbye.

But Sarah didn't forget about us.  When Anne-Marie got stuck in the hospital in October, she contacted her friend, Debbie and told her about us.  Her friend Debbie owns a house in Friday Harbor on Washington's San Juan Islands.  The two of them arranged for us to be able to schedule a trip to their house whenever it would work for us.

After thinking it over, it was decided that a good time of rest would be very welcome once we were through with radiation.  This weekend my mom graciously agreed to babysit (she comes tomorrow) and we are headed for a weekend in a quiet little house in a quiet little town.

Thanks Debbie! Thanks Sarah! 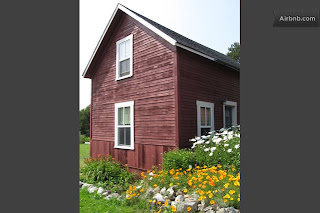 Email ThisBlogThis!Share to TwitterShare to FacebookShare to Pinterest
| More posts about Radiation, vacation