There's a *lot* of open desert in this part of the country so early mornings were a requirement. (I'm not a morning person. No, not at all.) We grabbed coffee and some genuine Tucsonian hot sauce and hit the road for New Mexico, which was state #6 if you're counting. 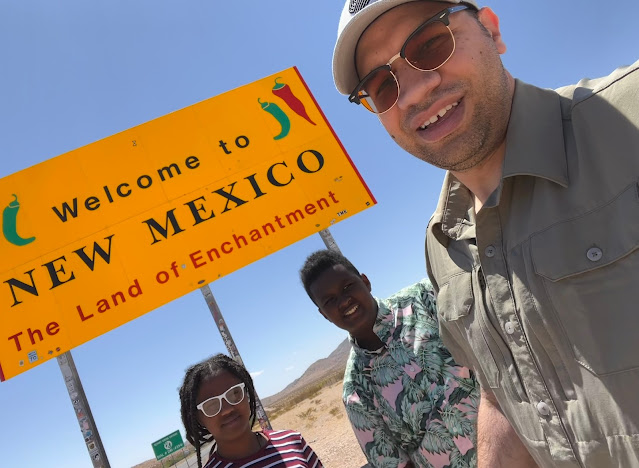 Mariah was feeling a bit sick coming out of the weekend, so we cut a few things from our itinerary and pointed the SUV toward White Sands National Park. This gave us a chance to do a quick stop in Las Cruces to buy sleds (I'll explain) and make our first trip to Whataburger, which may get a mention in the soon-to-come RS: Food and Fun post. 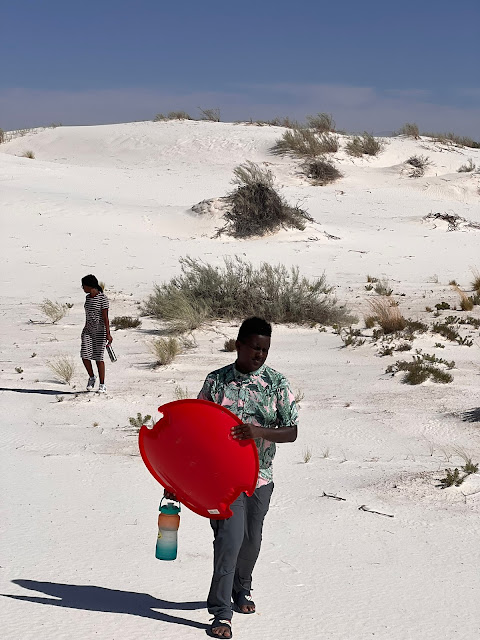 I'm glad we went to White Sands, because the thousands of acres of bright gypsum powder are unique to this one place on Earth. However, it was really hot and the sledding thing didn't work that well, at least for us. Maybe we should have gotten some wax or something. Has anyone else had luck with this? It was non-stop frustration for us.

From there it was south to El Paso and the kids first trip ever to the state of Texas.

El Paso has amazing food, exciting history, striking architecture, but why is this city just kinda creepy? I'm not sure what was up, but the streets--with all their things to see, do and eat--were just oddly quiet in the evening and not much better in the morning. I don't get it. Oh well.

If there's any chance of me "getting it", I can guess that it's because included in the AirBnB was a super-spooky, but much needed coin-op laundry room that was practically hanging over the Rio Grande and looking into Mexico. It could not have possibly been more horrifying without being an active crime scene, but I did the laundry anyway.

As a side note: our tentative trip into Juarez, Mexico, was dropped due to the virus Mariah was fighting.

El Paso In General Radical Score: 5/10 (my least favorite city of the trip)

This second week of the trip really was us making an unscheduled and undisiplined trip across Texas, and Texas is pretty big, which means a lot of driving. No day said it more clearly than this one, but driving through the nothingness of Texas gave me the chance to give the kids their first driving lesson in the tiny town of Fort Stockton. Beyond just being a great memory it was an amusing diversion from the miles and miles of desert.

By late in the evening we made it to an AirBnB condo in San Antonio and got late night tacos at a truck a few blocks away. (My life was changed that night, but [again] I might leave that for the food post.)

We allowed ourselves to sleep in that first night in SA, but too many adventures were calling by mid-morning.

We hit Legoland Discovery Center first, because even as early-teens, the kids still can't quite say no to Lego. (Note that this is not the same as Legoland Resort in California and Florida. Those are theme parks; LDC is more like a Lego museum.) Fun, but just the beginning. 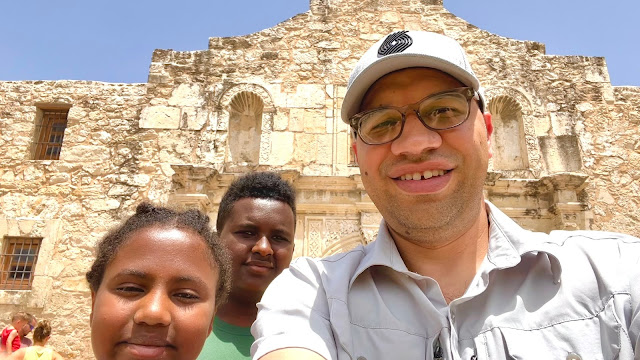 We went to see The Alamo, but kind of like Hoover Dam, we weren't feeling the full-blown tour. We opted to walk the grounds, which are very beautiful, and catch an Uber to... 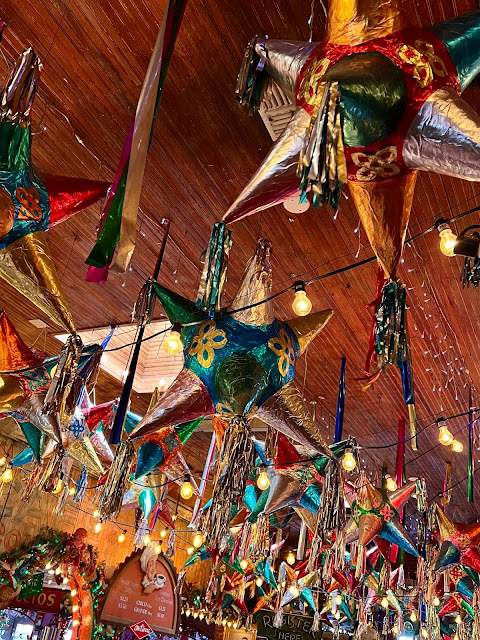 Market Square! This mercado is the largest Mexican market that's not in Mexico, so we made up for some of what we missed in Juarez the day before.

Market square is not far off from Seattle's Pike Place Market, but with less fresh food and more leather. We took in all of it that we could of the music, souvenirs and food before Ubering back to our car for my favorite part of the day.

The River Walk is the best part of San Antonio. Rather than walking the Walk, we decided to take the guided cruise to learn the history and see the most famous sites the city has to offer from the water. The network of canals displays the art, architecture, culture and beauty of the city in the most relaxed way possible. Highly recommended, which is why I give it... 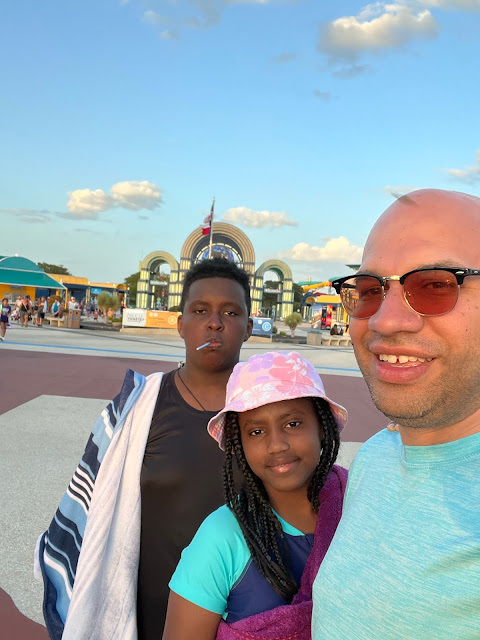 We purposely selected our AirBnB to be at a midpoint between downtown and SeaWorld. I knew that endless weeks of rocks and plaques would be too much to ask of the kids, so it was time for a non-stop fun day at the SeaWorld water park. We splashed and screamed and played all day at one of the best water parks in America. Then we drove back to the condo for a nap. Then we woke up and did it all over again in the evening. Just about zero photos to show, but it was crazy and unhinged fun.

It was time to say goodbye to San Antonio, one of the biggest surprises of the trip. We may even go back some day just for fun.

Did I say something about Texas being really big? We had our second drive day of the week taking us all the way from San Antonio to Beaumont. With our only significant stop being Buc-ee's, the biggest truck stop I've ever seen in my life.

I have friends from way back that my kids had never met in Beaumont, so we had a good time with their family catching up and telling stories.

Day 14: Beaumont to Vidor to Galveston

My friends don't just swap stories, they're crazy-talented music minsters at their church in Beaumont. Of course, I knew that, but I'd never seen them in action and these guys have been *putting in work* the past 15 years we've been apart. It was also Father's Day, so we sent them off to celebrate with family and went to Waffle House to celebrate (Waffle House will be on that food post for absolutely sure). 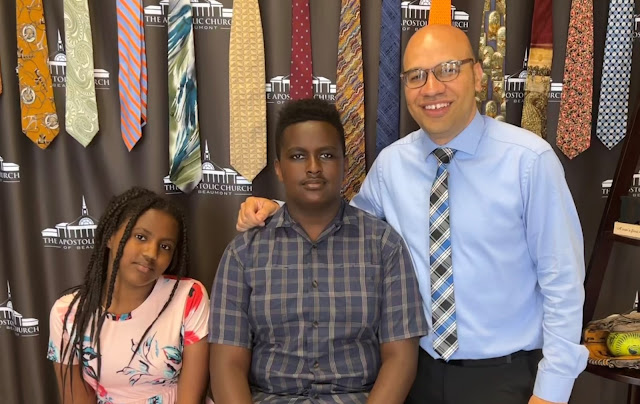 We got a sudden inspiration while we were at Waffle House. I have another longtime friend that pastors a church just down the road and they were just about to start their service. Since it was still "freestyle week", so we decided to go. I don't get to make a surprise appearance 2300 miles away from home every day, so we had fun with it. Elisha and Mariah were just about beyond fun by then. 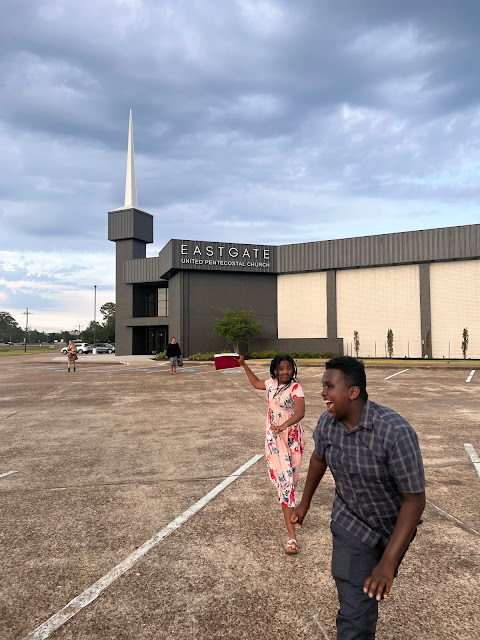 For the first time in two weeks, we made the decision to drive backwards. To start week 3 and wrap up our time in Texas, we were headed west to Galveston for some beach time.

Next up: Galveston, New Orleans, Montgomery