Las Vegas wasn't our thing. It just wasn't. Too much facade; not enough substance.  The food was great and one other thing.

The Pinball Hall of Fame is my favorite thing in Las Vegas.  No admission and the machines still cost a quarter so for $25 dollars we all played an hour on machines that go as far back as the 1930's and 40's. Also, it's air conditioned! Triple-digit temperatures make this invaluable. 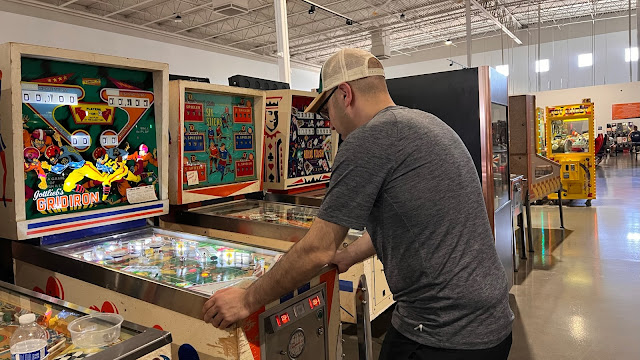 We had to make it to our hotel on Route 66, so a mid-morning departure to the east was a must. Hoover Dam is just outside of town, so we made the quick stop and I spent my first moments ever in my mom's birth state of Arizona. I worked a decade in structural engineering, but really Hoover Dam looks like a big concrete wall to me. Fascinating as a short stop, but maybe we should have taken the really expensive tour (we didn't). 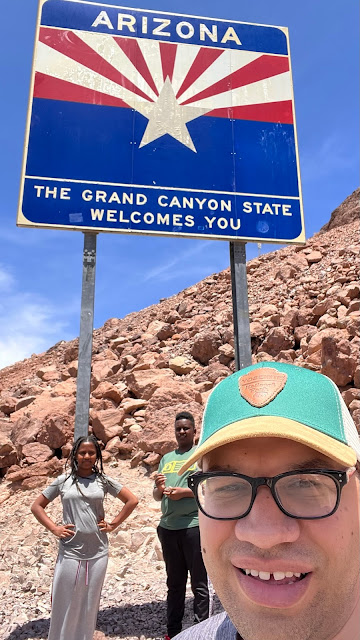 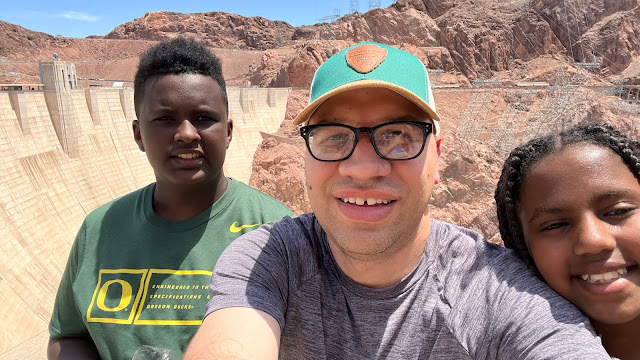 We weren't done because the Grand Canyon was just a few hours away. We opted to go to Grand Canyon West to save a day of driving. (Going to the South Rim would have added another 7 hours to our route.)

Here's the deal with Grand Canyon West: it's run like a business. There's roadblocks set up a few miles south of the canyon with a visitor's center and shuttle buses that ensure that you won't even get close to seeing anything without paying admission. We waited for the bus that promised us two stops of panoramic canyon views. The first stop featured the famous Skywalk, gift shop, restaurant, etc. It also featured big fences that obscured your view if you didn't buy tickets to the Skywalk. Blech!

No cameras are allowed on the Skywalk. You can pay them to take your picture. It's not cheap and the lines are long to get one. Mariah opted not to go on the walk due to her fear of heights, so I thought we might not get any pictures at the Grand Canyon. Vegas, Hoover Dam and now the Grand Canyon! I was starting to get frustrated. We bought our souvenirs at the shop and drug our disappointed selves to the second stop.

It was absolutely perfect. No fences and no sales pitches, but just pure and beautiful amazingness. We got our pictures. What was I worried about? 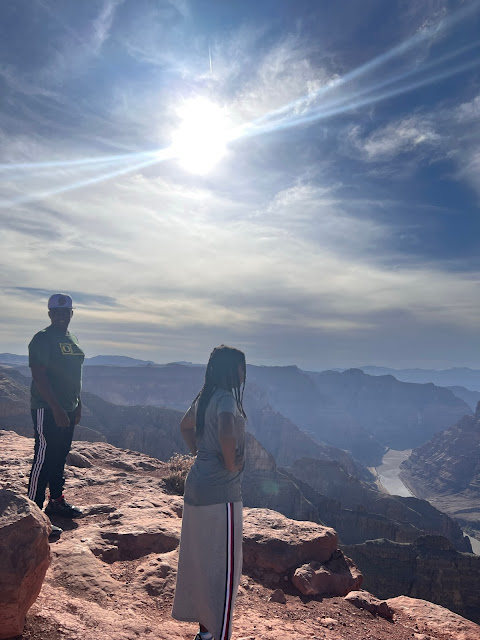 We *still* weren't done because we had a reservation in Seligman, Arizona, at a motor inn on Route 66. It was getting late and we needed dinner. We coudn't find an open restaurant. I hit a jackrabbit (Not kidding. That actually happened.) We pulled into Seligman at 9:15 and found the world's loneliest Subway for dinner just before closing. The longest of long days was over. 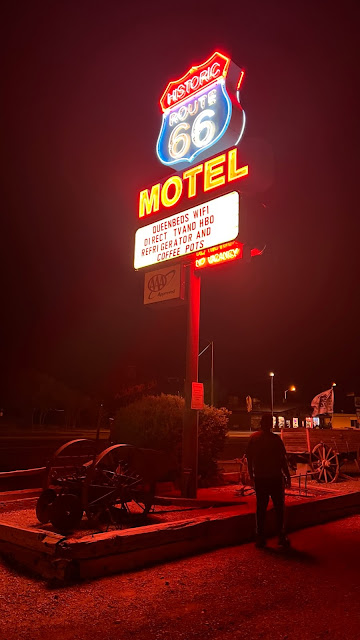 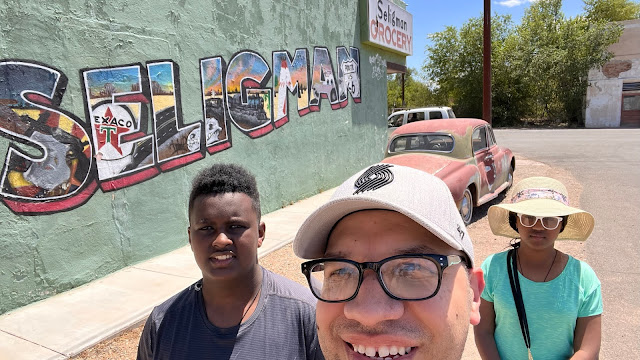 Seligman, Arizona, is the town that inspired the Pixar film, Cars, and it lived up to every bit of it's nostalgic reputation. Diner food, old cars, souvenir shops. Every picture you see in your mind of what Route 66 is supposed to look like, you can find in this town of 450 people.

Afternoon pushed us on to Sedona, to meet friends at Slide Rock State Park. The 80-foot-long natural sandstone waterslide makes this one of America's best swimming holes and the kids were all in for every bit of it. It's a former apple orchard surrounded by red canyon walls and full of happy people. 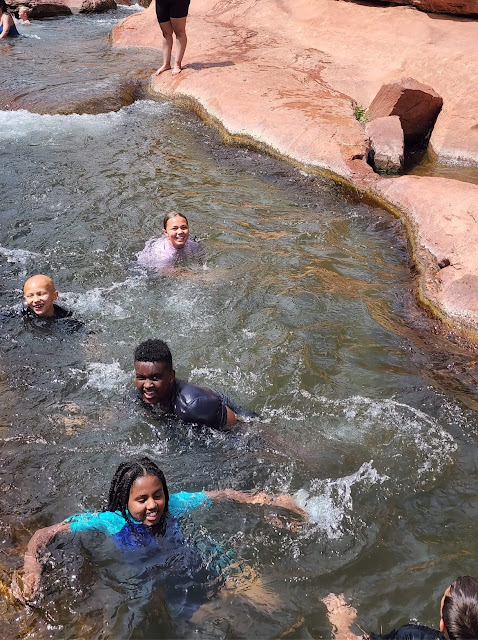 Sedona itself is a high-end resort town that manages to still be accessible. It was a short break for food and shopping, but worth the stop.

We were due for down time and thankful for a comfortable place at Aaron and Teri's house. I'm not even quite sure what we did on day six besides breathe, let the kids splash in the water and refill the snack box for the next leg of the drive. We had a great time at Pentecostals of Phoenix on Day 7.

We were just about recharged to start the second week.

Phoenix Overall Radical Score: Undetermined, because we really didn't do much in town.

Day 8: Phoenix, Mesa and the drive to Tucson

Monday, June 13, was an opportunity to meet one of my longtime co-workers for the first time at his home office in Mesa, Arizona. Catching up on emails and solving problems from the week I was out took a few quick hours. Mesa (on the east side of Phoenix) was where my mom lived as a little girl, so I got to visit her childhood home and school. 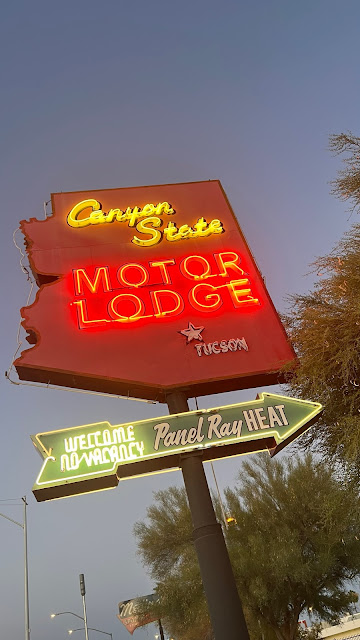 It was time to head southeast for the next leg of our journey, but like I said, we were *just about* recharged for our start to the second week.  By the time we made it to Tucson that evening, we were done. The second week of the trip was set up to be a "freestyle" schedule, so we were ok to take in the Miracle Mile and eat the amazing food before pushing on 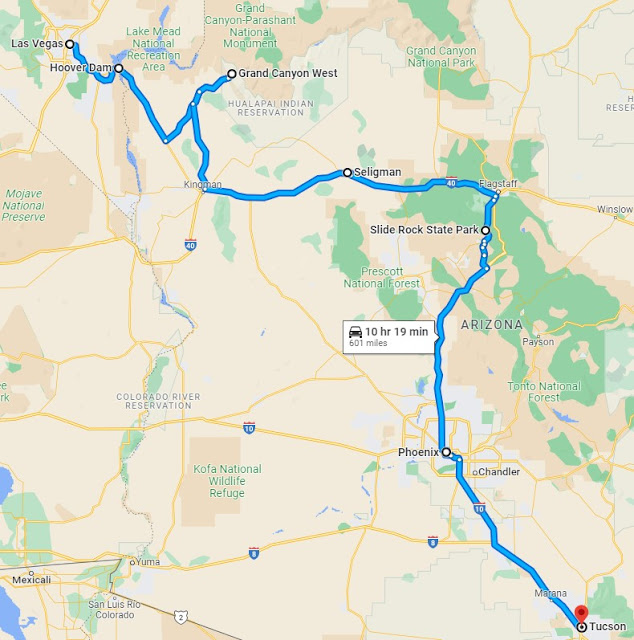