Are you serious? Life in a motel, Part I

(OK. That was horrible, but the lyrics are probably only as senseless as the original.)

Yes, we live in a Motel! We were trying to find a place to live somewhere in Pierce County by the end of September, but that didn't happen.  Around the beginning of the month, we found a place, but it isn't available until November.  Since we were eager to get moved into the area, we decided to move here immediately and stay somewhere temporarily until the house is ready.  Thus the motel.

Originally, we intended to move into Crossland Economy Studios, but when I went down to look at one of their rooms, I found out the largest room they have to offer is only 280 square feet.  I knew we had to fit ourselves, a kid, another kid, cribs, toys, all of our clothes, a box of books, food and my guitar in the room, so I started scrambling for other solutions.  After a bunch of stuff didn't work out, we decided to drive to Puyallup with all our stuff and just look at available rooms in person, that way there were no surprises.

Desperation makes the decision process easier, so we decided to stay the first place we looked, one of the suites at a place in the center of town.

The place is at a former Nendels Inn (remember those?) gone independent, that took the Conference Room and--since the business crowd isn't coming 'round much anymore--converted it into a suite.  Does that mean it's large?  Yes, it does.  Probably about 700 square feet large. 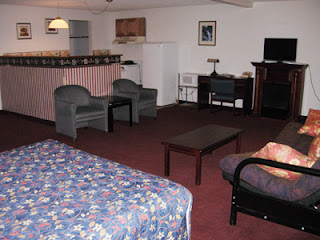 It's one huge studio that sleeps six, so we hang up blankets to wall off the kids cribs at naptime.  (I'm not kidding.)  It has a kitchenette and a dining room behind the little half wall that also serves as Mariah's bedroom.  It's almost like living in an apartment, except you get maid service and free croissants.  But would you expect any less from a 1-and-a-half star establishment?

Email ThisBlogThis!Share to TwitterShare to FacebookShare to Pinterest
| More posts about the move