Notes on the 8th surgery

It's not like we haven't been through this before.

The surgery team asked us to arrive so early that I just know it was in the 5 o'clock hour.  Exactly when it was has been forgotten.

This time I was prepared with four days worth of clothes jammed into my laptop bag.  I wasn't leaving the hospital until Anne-Marie did and the doctor said we'd be there four to five days.

Along with the projected length of stay, the doctor predicted a 12-hour-long procedure.  12 hours is over double the longest surgery that Anne-Marie has ever had.  Maybe we hadn't done this before.  Half an hour in the surgery waiting room with the most nervous people in America was enough for me when they called us back.  It was around 6:00 AM.

Prep time doesn't count against your 12 hours so the next hour was us getting told stuff we already know and working with Anne-Marie's (first ever normal) anesthesiologist.  Somewhere during the process the timeline was corrected to 12 and a half hours.

As always, parting was very hard, but this time not being able to say "seeya in a few hours" made it different.  At the same time, after having been through this so many times, the projected length of procedure is always wrong.  I've found that it's about 20% pessimism.  If they say three hours, it's usually two, including time in the recovery room.  Anne-Marie was taken back to the OR at 7:30 AM.  There's no way I could imaging not seeing here until 8 that night.

So there I was, alone, and with the whole day in front of me.  I brought stuff to read, along with my laptop to pass the time.  The first hour was spent as it has been the last seven times we've done this: in the cafeteria.  After that, I settled in for the long wait by posting a bunch of hospital humor on Facebook.  Hospital humor is like gallows humor, but not as dark.  And not as funny.

And then there was this gem: 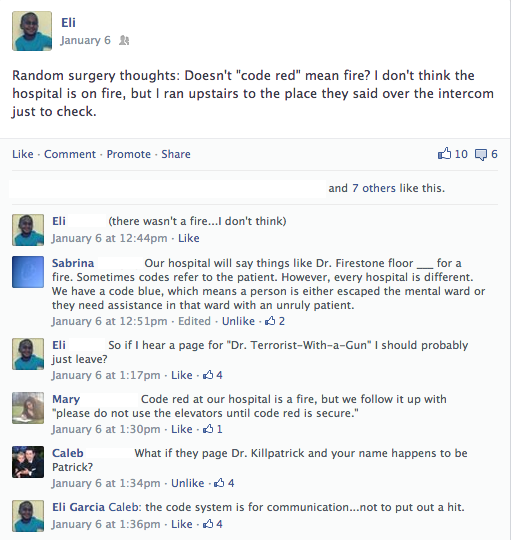 I stayed in my good waiting room spot until lunch time (and that's when I wrote this post and this post.)  I knew I would get a call any moment from the Dr. Colohan with an update.  I waited two hours longer than I thought I would, but at 2:30 the surgery waiting room phone rang.  Dr. Colohan, who is Ontarian, said she was "just abuoot halfway through".  They'd been working to connect transferred tissue to existing tissue and blood supply connection required a microscope.  The extra steps set them back.

I still figured that the timeline was pessimistic.  Surely the second half would be without complication and go faster than the first.

My mom arrived with the kids soon after and we went to the family lodging at SCCA house (aka, The Cancer Hotel).  I took the kids to the playroom (because kids at SCCA house have their own playroom) and then took nap.  When I woke up, it was 6 PM.

We went across the street for burgers.  I was completely distracted.  The kids were thrilled because they got to eat junk and thought they were on some kind of vacation in downtown Seattle.  It was 7 PM.  Why hadn't they called me?  Panic set in.  I had to get back to the hospital.

8 PM found me back in the surgery waiting room with just two other people.  I think they were waiting for people that were in emergency surgery.  By now time was more than up, but the video monitor was telling me otherwise.

9 PM was exactly the same as 8, but I was joined by one other nervous spouse and a team of janitors.  Just after 9:30, the surgery assistant called to let me know they were "closing up".  Soon after the monitor confirmed this.

Dr. Colohan came out to talk to me about the procedure after 15 hours of what must have been the most intense labor and told me everything was fine.  Slower than expected, but fine.

An hour later, they wheeled Anne-Marie to the ICU and told me I could stay with her in the room overnight, which was completely unexpected.

I fell asleep at midnight listening to this:

Email ThisBlogThis!Share to TwitterShare to FacebookShare to Pinterest
| More posts about stories, surgery